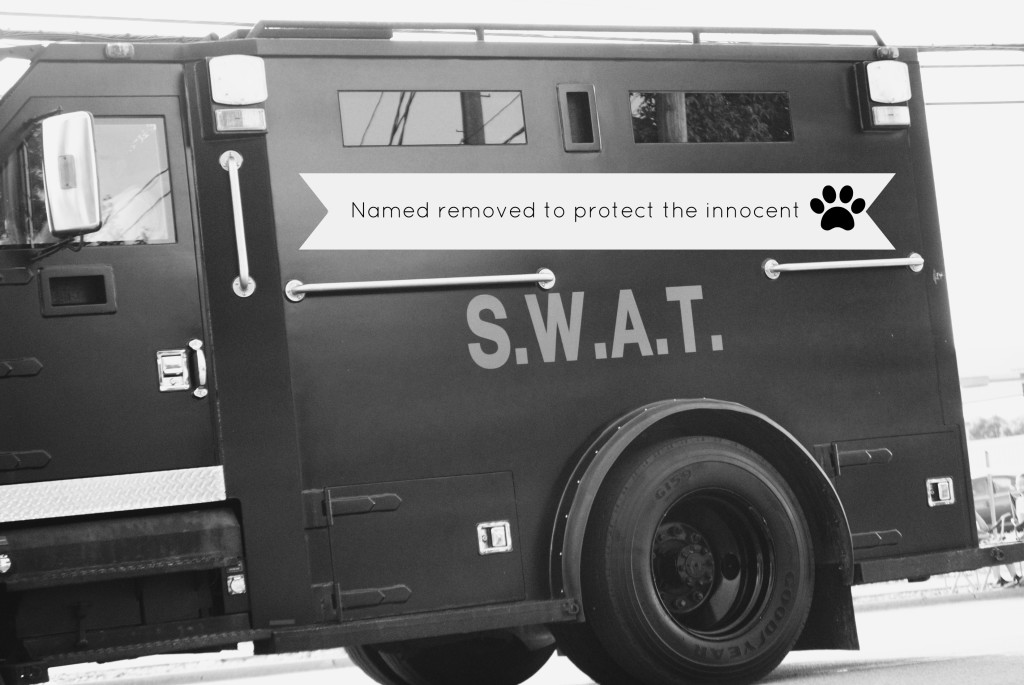 The other night Leroy and I were out taking our normal evening stroll and all of a sudden several S.W.A.T and undercover vehicles drove by.

That’s not a normal sight in my neck of the woods, so I was thinking something serious was going down somewhere close by and somebody was in a whole lot of TROUBLE.

Leroy and I continued on with our walk and a few minutes later I heard a vehicle pull up behind us. I did a sideways glance out of the corner of my eye thinking it was someone who was going to ask something about Leroy.

All I saw was a black vehicle and nobody said anything so I kept walking.

And the vehicle kept pursuing us, slowly……………..

So finally I whipped my head around and was going to shout something like, “Hey! Take a picture it lasts longer!” But as I whipped around I noticed it was a S.W.A.T vehicle and I immediately almost crapped my pants.

I whipped my head back around and kept walking.

I whispered to Leroy “What the hell did you do now?” and he just kept on walking.

I was terrified and all I kept thinking about was a personal Facebook post I did a few nights ago, really late at night, about having a great time duck taping my best friend to a chair.

Somebody saw that and reported it and now I’m in deep, deep trouble.

I didn’t do it. There is no proof. There would of been proof if it wasn’t so dark out and my cell phone picture would of come out. But it didn’t so there’s no proof.

No one can prove a thing.

Except for the chair.

Which still has duck tape on it.

So I had my defense all planned out in my head, when the vehicle stopped and one of the men rolled down their window and asked what kind of dog Leroy was.

I could barely talk, but some how I blurted out that Leroy was a Newfoundland.

Then the man asked if he could pet Leroy.

I was like, really? You’re going to get out of your S.W.A.T vehicle? Now? Right here? On the side of the road? In front of all these people driving by? To pet my dog? Aren’t you in hot pursuit of something?

Of course I didn’t say any of that out loud. I kept it safe in my head.

So I told him yeah, but all I was thinking is that this was a ploy to scoop me up and throw me in the back of the vehicle and take me down for questioning. How am I going to explain this one to the kids?

So the man got out, petted Leroy, and asked a few more question about him, he never mentioned anything about the duck taping incident.

Seems they weren’t in hot pursuit of anyone, including me. They were doing a training exercise.

So  I began to relax and then I noticed all the gawkers who were driving by and staring at us.

I have got to go.

This is ruining my image. My, the girl who has the dog who pulls her pants down while she’s walking, image.

Maybe I just don’t belong out in public.

I’m actually beginning to think I bring these type of situations on myself. But how? What am I doing wrong? How can I make them stop? What the hell is wrong with me?

Then I saw this quote the other day:

When you have big dreams, you’re going to have big challenges. If you were an average person you would have average problems.

I don’t know who said it but it works.

Whatever, it kind of works and it makes me feel better.