My apologies for taking so long to get this post up. You know how it goes, you’re gone for 2 days and then have 4 days worth of housework to catch up on. It’s sad but true.

As I said before the Detroit show was a blast. The weekend was filled with lots of firsts for Leroy, but no first  place ribbons.
I learned a lot and so did Leroy.
One thing that I learned was that showing Leroy in Best of Breed is not nearly as stressful as it was showing him in Open Dog Class. There didn’t seem to be the pressure to win. We weren’t in a do or die type of situation. If we lost, we lost.

Another thing that I have learned over the years we have been showing is that every judge has their opinion and every day is different. I have come to like the judges that give constructive criticism. While they may not put a dog up, some judges take the time to tell you why. Feedback is good. 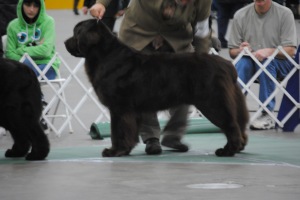 The Saturday judge was a quiet man. He liked what he liked and he did not appear to like the looks of Leroy. He gave Leroy a courtesy glance and that was really about it. Sure he went through the motions of judging him, but we knew as soon as Leroy did his first go around that he wasn’t a fan. Was it his color? Was it his type? Was it is movement? We will never know.

The Sunday judge was a good judge. I liked her. She was an elderly lady, but a very well known judge and I have seen her judge some of the bigger shows. She used a cane to walk which was a first for Leroy, and all we thought was, please don’t let Leroy try to eat the cane. Having an article like this in the ring exposes dogs to things that they may not be use to otherwise, which is why it is always good to expose dogs to other situations. We never thought about exposing Leroy to a cane. Luckily for us he didn’t try to eat it.  I don’t think he even noticed it. 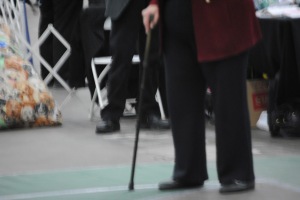 Anyway the judge gave all the dogs a good look. She was big on their fronts, making sure they were strong and not weak, like toeing out too much. On Leroy’s down and back she spoke with our handler for a moment. We had no idea what she said but learned later that she was asking how old he was. She thought he was younger than what he was and said that he seemed immature.

Physically immature, not mentally. We all know that Leroy is and will always be mentally immature:)

She said he was a great looking Newf but needed some more maturing to do and that she would like to see what he looked like next year. This was good to hear. This is the type of feedback I need. She took the time to say he’s a nice dog but he will be even nicer next year, and coming from this judge I take that as a compliment.

So while we are still without a victory in Michigan, we are a bit more wiser.

I would like to thank 2 Brown Dawgs and Misty Shores Chesapeakes for doing such nice posts on meeting Leroy at the show. It was such a pleasure to talk with you both and I hope one day in the future we will be able to do it again!

Geraniums Are Toxic to Dogs. I Didn’t Know That!

What Would Your Name Be If Your Dog Had Chosen It?
Tags: Dog

Challenges I Faced With My First Rescue Newfie