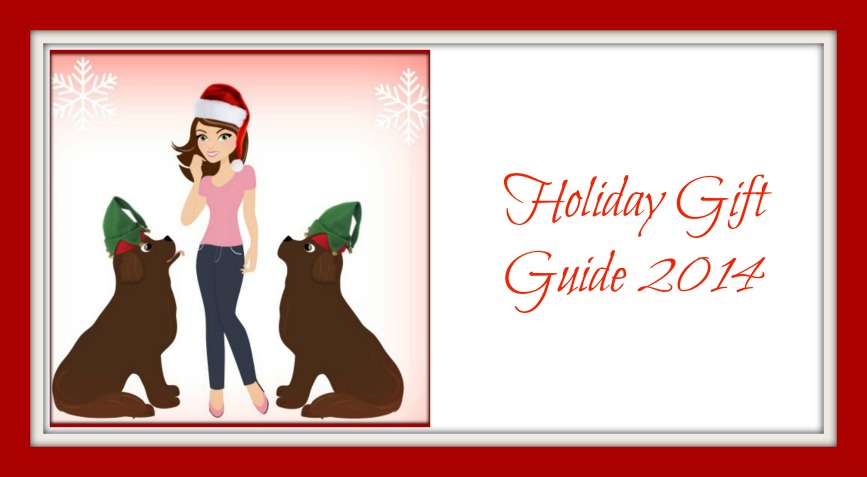 A few weeks ago I came home from work early.

I was super tired and the kids were still at school so I decided to seize the moment and sneak in a short nap.

Naps are a very rare luxury here so whenever a rare opportunity to sneak one in presents itself, I’m all over it.

The only obstacle standing in my way of this rare nap opportunity was 2 brown dogs so I carefully calculated my time.

If I take the dogs for a walk, give them a snack and have a small playtime session that would give approximately 60 minutes of nap time.

I was right on schedule after playtime so I eagerly settled myself down on the couch and covered up with the blankets,

Just I was about to drift off Sherman decided it was time to lick his man parts.

I tried turning over and covering my ears with the blanket but that wasn’t working so well so I sat there and waited for Sherman to be done.

After about 10 minutes I guess his man parts were finally clean enough or he licked them off…….so I started to drift off again.

Then Leroy started barking out the front window.

He wasn’t barking at anything.

He was just trying to annoy me so I threw the thing that was closest to me at him.

The thing was one of his squeaky toys and I had no idea the mistake I had made by doing that until I was once again about to drift off into nap land and I heard, squeak, squeak.

Then I opened my eyes and let out a growl.

Any other time I would think Leroy squeaking on one of his squeak toys would be adorable because he picks his squeaky toy up in his mouth, squeaks it a few times, lays it down and then pecks at it with nose to get it to squeak.

Unless of course you’re trying to take a nap.

After about 10 minutes of the squeaking I jumped up, ran to room of dogs toys that have not been used yet and grabbed our newest addition, the Hear Doggy giraffe by goDog, a part of the Quaker Pet Group 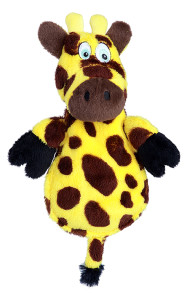 The Hear Doggy toys are designed to produce a squeak that dogs can hear but not humans .Dogs can hear sounds at a higher frequency (0 to 45KHz) than humans (0 to 20 KHz). Tuned to an ultrasonic range in the 24-28 KHz frequency, each Hear Doggy! squeaker is out of human hearing range, but still fun for your four-legged friend.

The Hear Doggy toys also have the same Chew Guard technology as other goDog products which adds a tough durable liner.

So I grabbed the toy, gave it a squeeze and all I heard was a puff of air.

I ripped the tags off, stole Leroy’s other squeaky toy out of his mouth, squeaked the Hear Doggy which made Leroy cock his head in that adorable way that dogs cock their head when they hear something good, and then set the toy in front of him where he squeaked and squeaked for an undermined amount of time because I feel asleep!

And that’s the story of how I took a nap 🙂

Check this out!~ goDog also has a super cute line of holiday toys if you’re looking to fill your dog’s stocking with a festive toy. 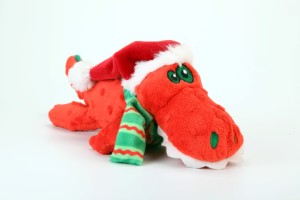 Jen’s Note-Keep in mind that plush means PLAY not CHEW. A plush toy is not a baby sitter for your dog so save the “My dog will rip that toy to shreds if I leave him alone with it.” Blah, blah, blah. If you have a dog that destroys toys made out of fabric don’t buy them one or supervise them when they have one.  Let them play with it and then take it away. It’s called smart parenting. 😉

**Disclaimer- I received the Hear Doggy giraffe and holiday toy from Quaker Pet Group in return for my honest review of their product. The opinions expressed here are mine and mine only.

A Bow Tie For Sherman