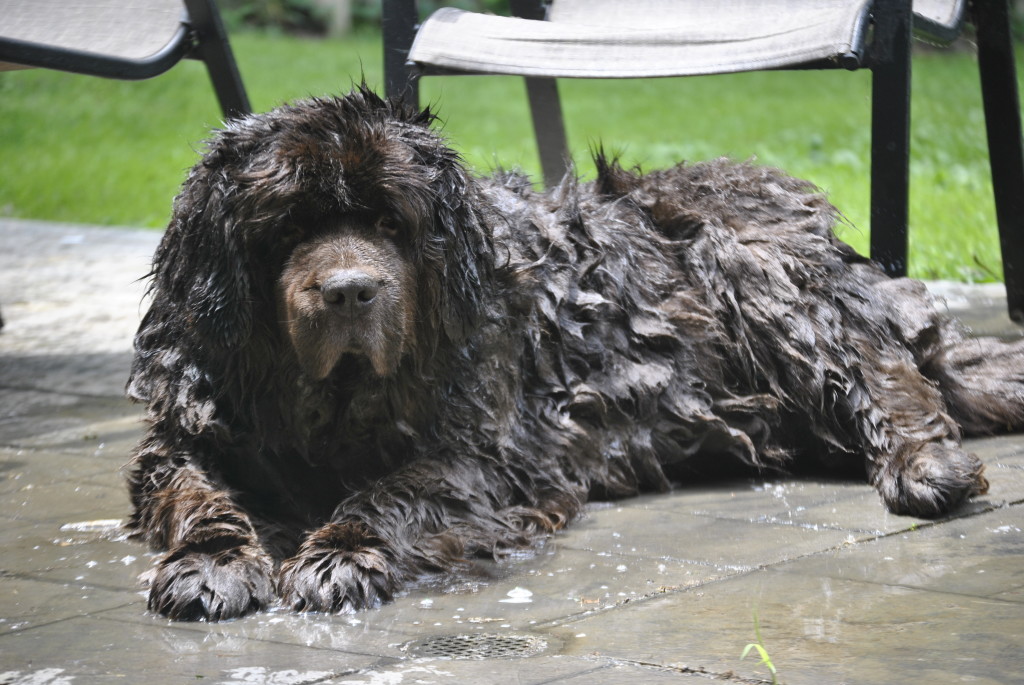 I get a lot of people who ask how often I bathe Sherman and Leroy  and seeing as they both just got a bath I thought this would be the perfect time to make a public statement about that.

On average people say dogs should be bathed 1-2 times a year but I would assume that’s for a dog who doesn’t slobber all over themselves, roll in stinky rabbit shit, had a bout with diarrhea that dripped all down their leg, have urinary issues or just went swimming in the grossest lake ever.

Some of us have dogs that do this on a regular basis and some of us do not.

Because of that I’m sticking with my normal answer to general questions like this.

It really depends on the dog

Every dog is different and some dogs are dirtier than others. 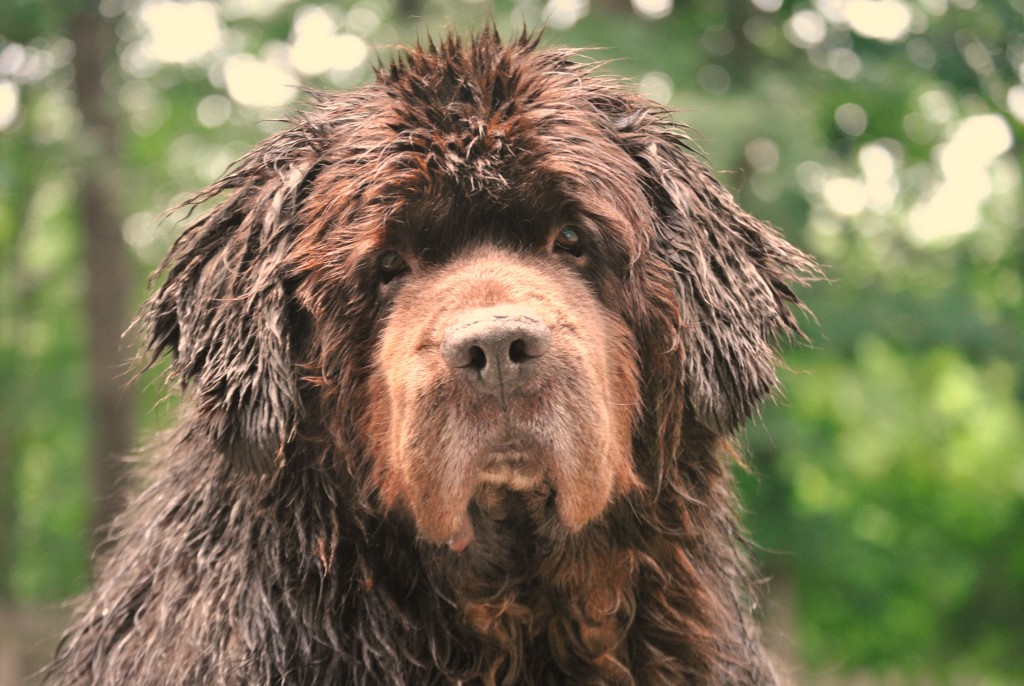 Take Sherman for instance. He is THE slobber monster. The drool from under his chin not only gets on his chest but it also gets on his legs when he rests his head. This drool hardens over times. It’s like hair gel that has crusted over. I can’t be home every second of the day wiping his legs and saran wrap doesn’t work either. (kidding) Sherman’s also a lazy pee-er. He dribbles when he tinkles so sometimes he smells like pee. This is why Sherman gets a bath more often than Leroy.

Don’t get me wrong. Leroy’s a pig pen too sometimes but he can usually be spruced up with some water-less shampoo or a good brushing.

Sherman and Leroy usually get a bath when I feel that they are dirty and after a good brushing they still feel dirty which is about 3-4 times a year or when they’re leaving a film on anything they touch. You know, like the oily film you can see on your glass door where a particular Newf naps most often. 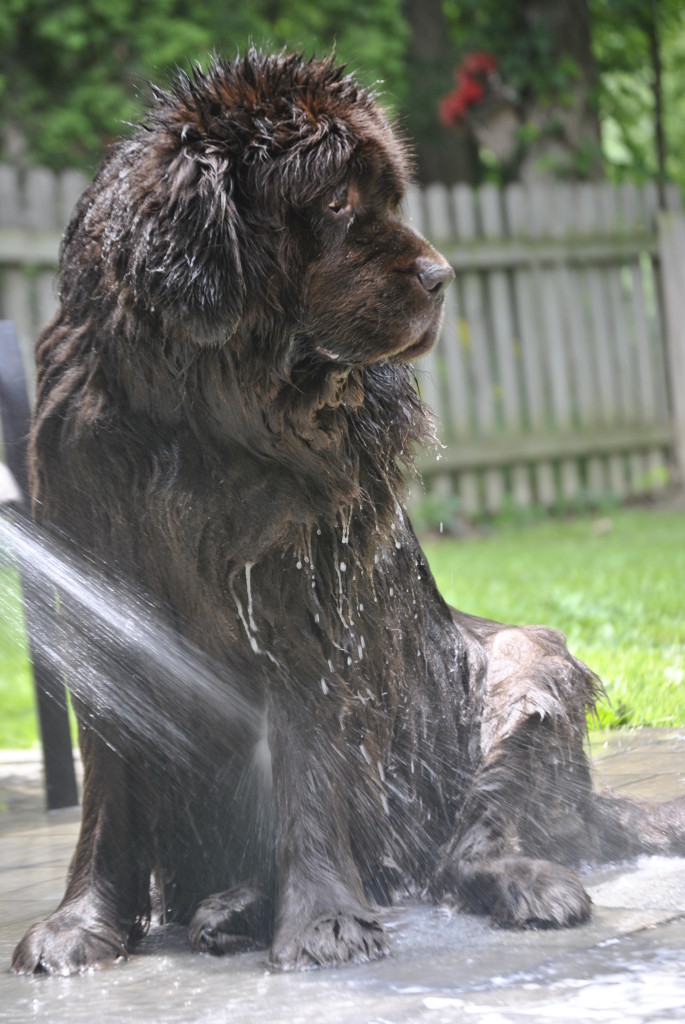 The other day they both got a bath even though they weren’t due for one but the never ending rain that we’ve been experiencing has created quite a muddy mess and they both insist on walking through at least 2 mud pits a day and Sherman had crusty legs..

We don’t have a tub big enough for them so they get bathed in the garage or on the back patio with a hose. I’m still waiting for my dog room to be constructed.

It’s not too hard to give them a bath. The hardest part is getting their waterproof coat wet.  You can soak their coat and in one shake they look almost dry, which means you haven’t done a good enough job.

Lathering them up and rinsing is pretty easy. 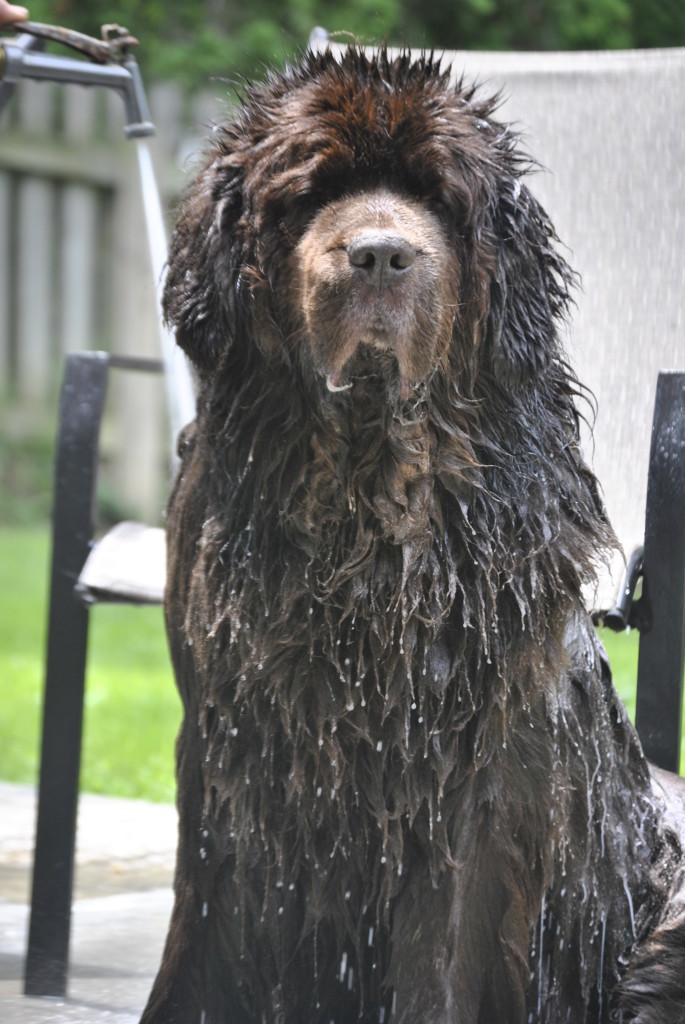 Leroy’s a different story which is why there’s no cute wet and wild pictures with him. He likes to buck like a wild horse and sneak away every chance he gets.

He totally eyeballs you too.

Spray that hose at me ONE. MORE. TIME.

He’s a pain my butt when it comes to baths.

But the whole bathing process takes about 30-40 minutes per dog.

Drying is the long part.

I always blow dry the dogs with a high velocity dog dryer and that can take anywhere from 2-3 hours.  Why does it take so long? It’s a double coated dog with a water resistant coat. If I’ve done my job right I have gotten every piece of hair wet down to the skin. That’s gonna take some time to dry.

In the summer I try to let them air dry a bit which cuts down on the dryer time.

It’s long and boring but I do it to avoid that musty wet dog smell and to avoid hot spots.

The shampoo that I use varies because I’m kind of a dog shampoo whore. Right now I’m using a shampoo from Earthbath but when we showed and the dogs were getting a bath a few times a month we used a shampoo that was a better fit for frequent bathing. 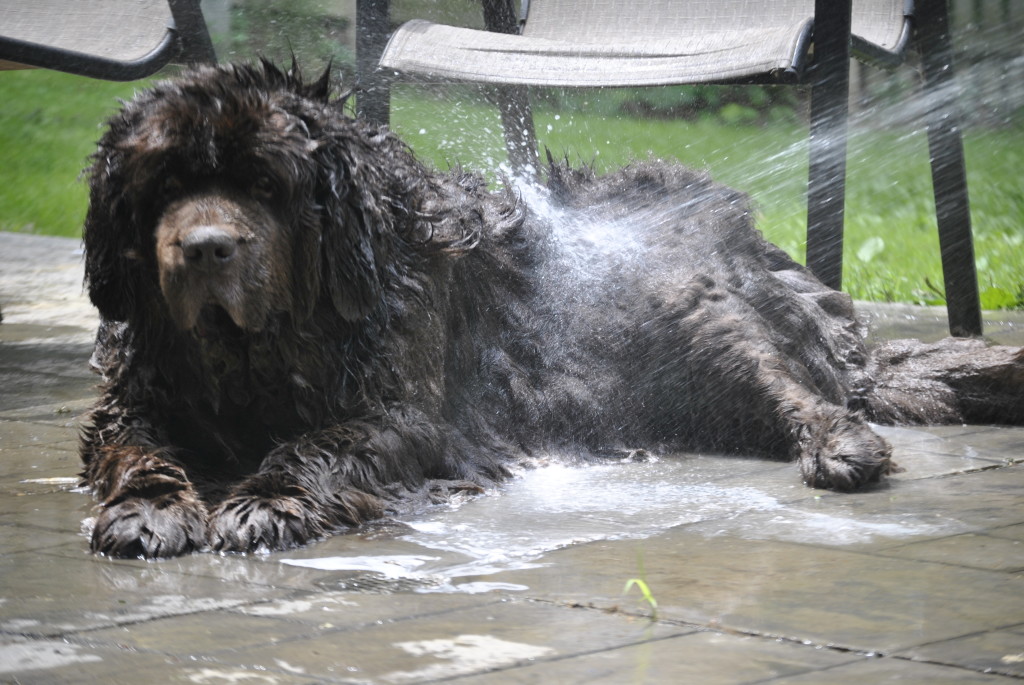 I very rarely use a conditioner, maybe once a year if that but I feel that a conditioner weighs down their already heavy coat. I have been known to throw it on their “pants” area and furnishings but that’s about it.

I’m also a HUGE fan on diluting your shampoo and conditioner. A lot of shampoos will have labels that read “can be diluted” I always dilute because one dog takes at least 1/2 bottle of shampoo.

I don’t think that there’s really a correct answer to how many times a Newfoundland should get a bath.  I don’t think they need to be bathed every 6 weeks. You don’t want to overdue do it because you don’t want to strip all of the natural oil from their coats but every dog is different and gets dirty in their own way.  Brushing, in my opinion, is the best way to keep them fresh and clean and their coats healthy.

But that’s just me. Someone else probably knows better 😉