One Unforgettable Journey, written by Dan Stallings and Pets Adviser Kristine Lacoste, is an amazing book that draws you in from the very first page. All you have to be is a dog lover to enjoy this one of a kind book. 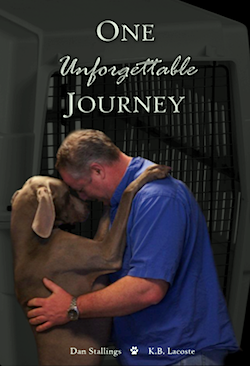 As Dan researched the ad he noticed that the dog was listed as a show dog. Not being familiar with show dogs Dan didn’t give this too much thought, and as with most rescues, he contacted the owner and set up a time and place to meet.

Dan had no idea what he was about to see when the car that carried the Weimaraner pulled up. As the family members one by one got out of the car all Dan was really interested in was seeing the dog. When the skeleton of a dog emerged from the car Dan was in shock. Every bone in his body was visible, and he had sores on his chest and nose.

As soon as Dan took custody of Maverick on that day, their amazing journey began.

From overcoming his health issues and abuse, Dan and Maverick form a bond that only a dog and a passionate owner can form. Starting a show career was just an unseen and added bonus.

It wasn’t an easy road to becoming a champion, due to Maverick’s neglectful past, but Dan was by Maverick’s side each step of the way, and Maverick’s happiness was the single most important objective.

I, being a dog show person was drawn to some of the many references that Dan made in regards to the show world.

I had to laugh when I read about Dan learning the lingo of the show world. I have been there. I laughed out loud when Dan was sitting ringside watching one of Maverick’s first shows and someone poked him on the back and told him that he had to move because Maverick could sense his presence and it was distracting him in the ring.  Dan had to move to an area where Maverick could  not see or sense him, which basically means standing far away behind a large object. 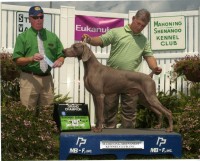 I’ve been there. When Sherman was showing, I could never be ringside. I was always ducking behind someone or hiding myself behind a pole.

I sympathized with Dan when he was trying to stay out of the way at a show and busy handlers were bumping into him and giving him the evil eye. “He was already nervous about the show, and these altercations didn’t help his anxiety.”

Been there. Sometimes shows can get a little rough and tough, especially when it’s your dog in the ring.

When I was reading the book about the shows that Dan and Maverick attended I couldn’t help but wonder how many times we have crossed paths over the years. “The Ohio show was indoors at a large convention center.” This would be the Cleveland Crown Classic that I show at every year, and there many more that were mentioned that I am sure we both attended. One of course being the AKC/Eukanuba National Championships in Orlando, Florida last December. Of course I was there as a blogger, not as a participant, and I missed them. Probably because I was lost somewhere.

Anyway, this is fantastic book and I don’t use the word fantastic very often.  My best read so far this summer and not just because it was about a show dog, it was about a dog and his amazing journey, from Craigslist to showstopper. Any dog, rescue or not, pure or mix,  has the chance to be a showstopper, they just need someone to believe in them.

A dog’s story, a rescue story, a champion’s story, there’s something in here for everyone.

For more information on Maverick’s story you can visit one of the links provided below:

Video summarizing Maverick’s story. This is a must see!

I will be giving away a paperback copy of this book in a few weeks so stay tuned!

Disclosure: I received a sneak peek of this book in PDF format. All opinions expressed in this post are mine and mine only.

What Would Your Name Be If Your Dog Had Chosen It?

My Everence Tattoo Journey With My Dog’s Cremation Ashes