Welcome to our second edition of Odin’s & Finn’s weekly adventures!

This is just a recap of some of the fun things that we did this past week and a place where I can share a few of the hundreds of pictures that I took of the boys this week.

As always, I hope these pictures and stories bring a smile to your face and start your week off on a positive note! 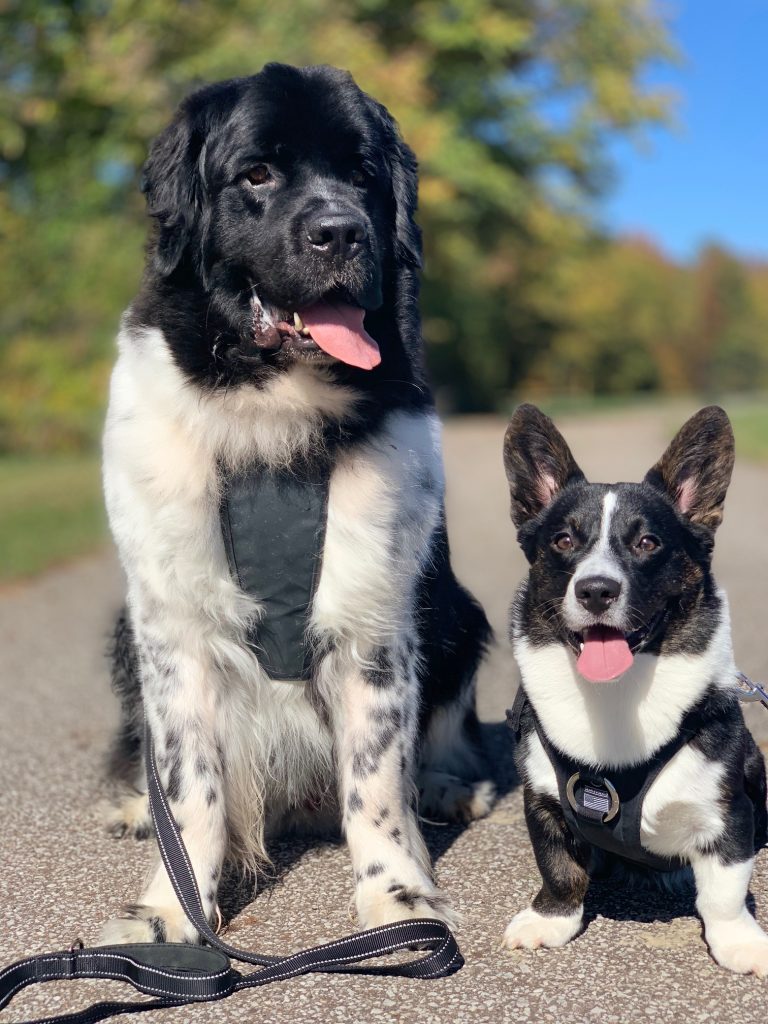 So Odin had more adventures than Finn this week and that’s because Odin and I went to a few places that were a little farther away than we normally do.

Since Finn isn’t a huge fan of riding in the Jeep just yet, I like to keep his rides short and sweet and we’re gradually working up. 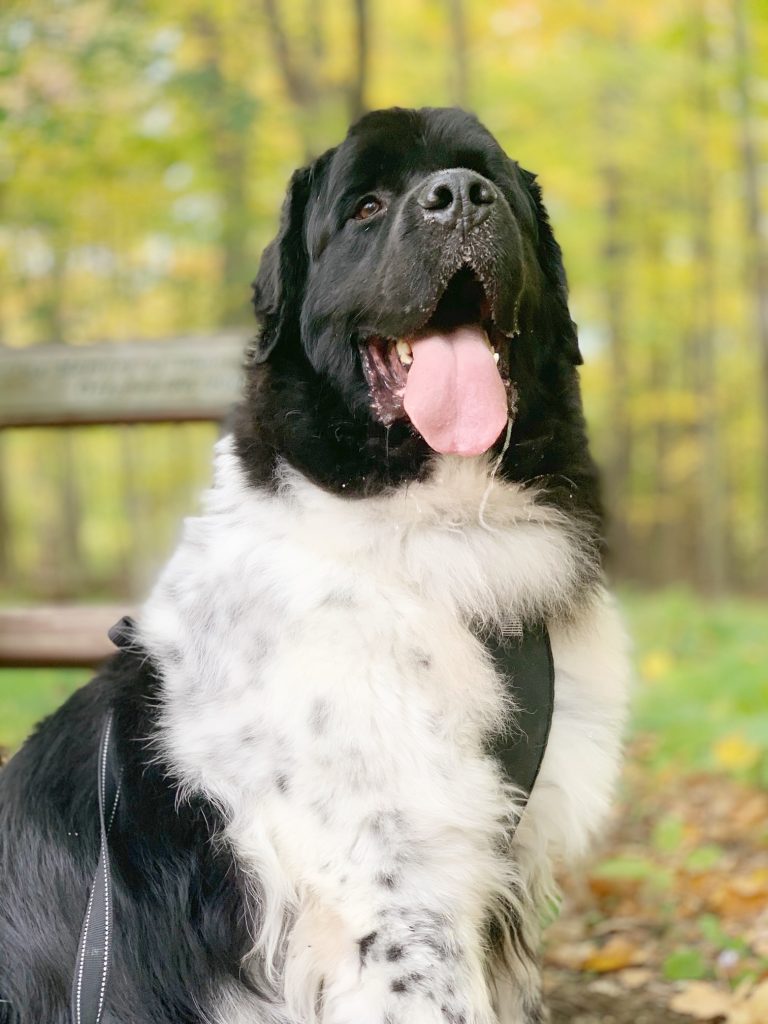 Also, I’m not comfortable walking both of them by myself just yet because Finn likes to stop a lot and Odin likes to keep moving, so I am at the mercy of my children and when they have a break in school.

I’m ok with this because I like to have one on one time with each of them too!

We also had to avoid our regular walking area this week because unfortunately, a deer was hit by a car across the street from our house and it died. 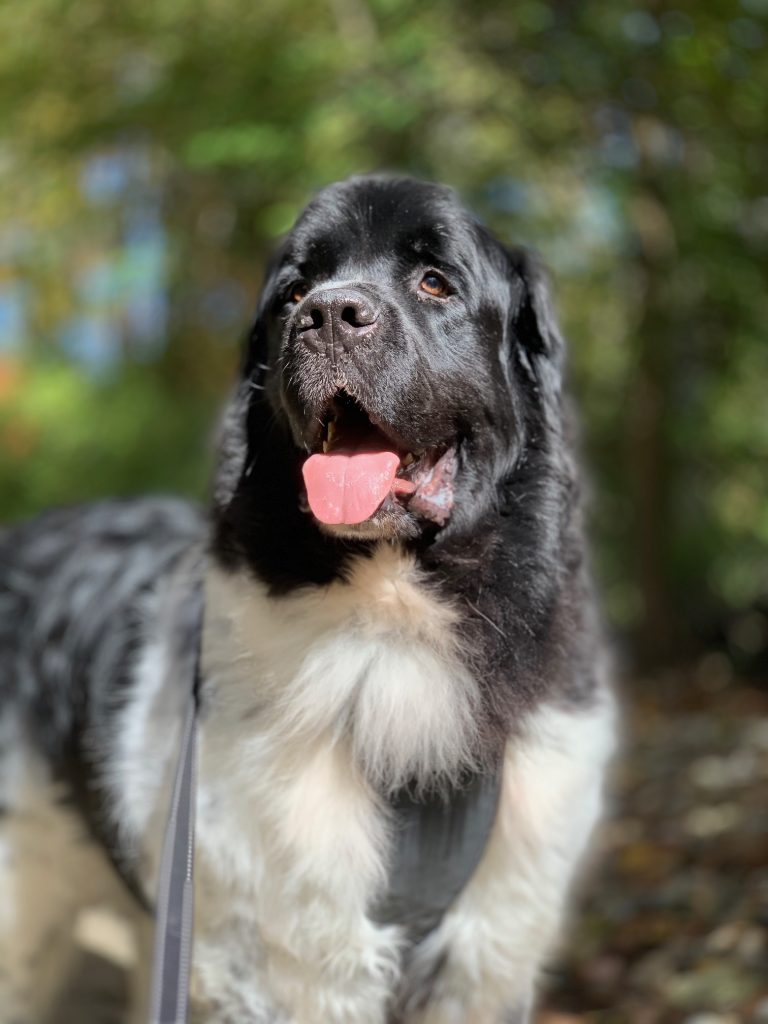 Since it was a holiday weekend animal control wasn’t able to pick the carcass up until Tuesday, so it sat there.

It left a big pool of blood on the sidewalk and I wasn’t comfortable walking Odin in that area until after we had a few rain showers to wash it away.

Again, I was ok with this because it gave me the opportunity to explore some other areas with Odin. 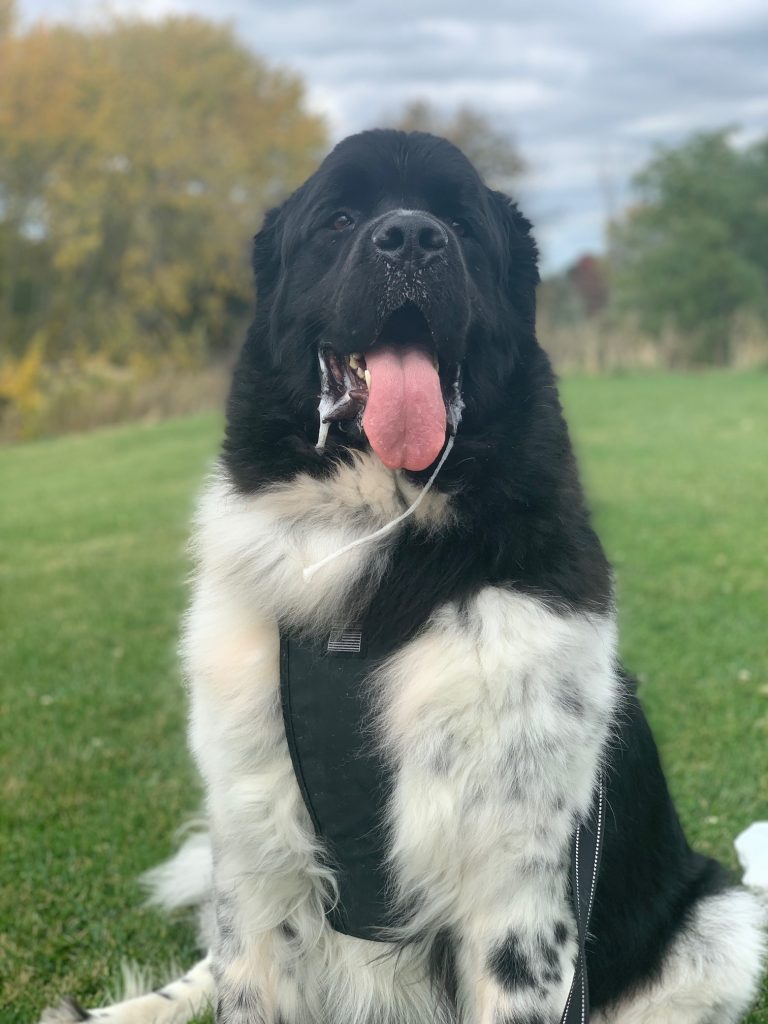 The first of the week we headed to a local football park.

This is a change from our normal ballpark area that we walk in and it has a lot of open grass areas and hills to walk up and down.

Odin and I made it up to the top of a pretty big hill and we sat and took in the beautiful view for a while. 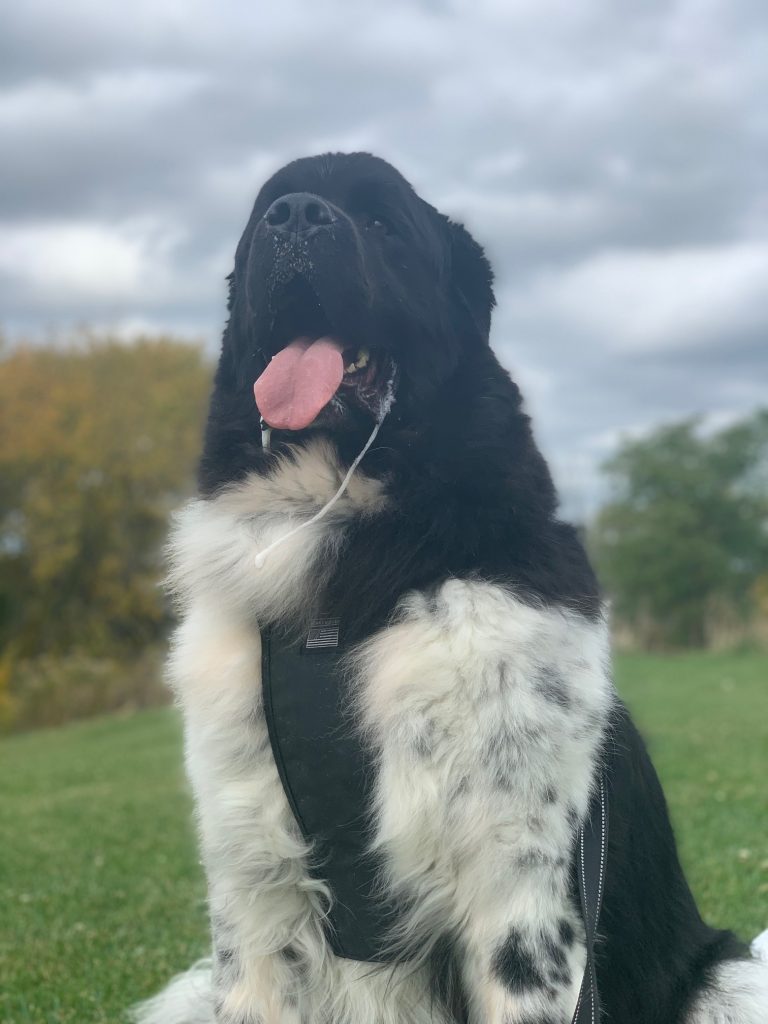 It was a warm day but on top of the hill, there was a nice, cool breeze.

There was also a flock of geese at the bottom of the hill that Odin was quite interested in!

The next day we went to the ballpark and Finn joined us. 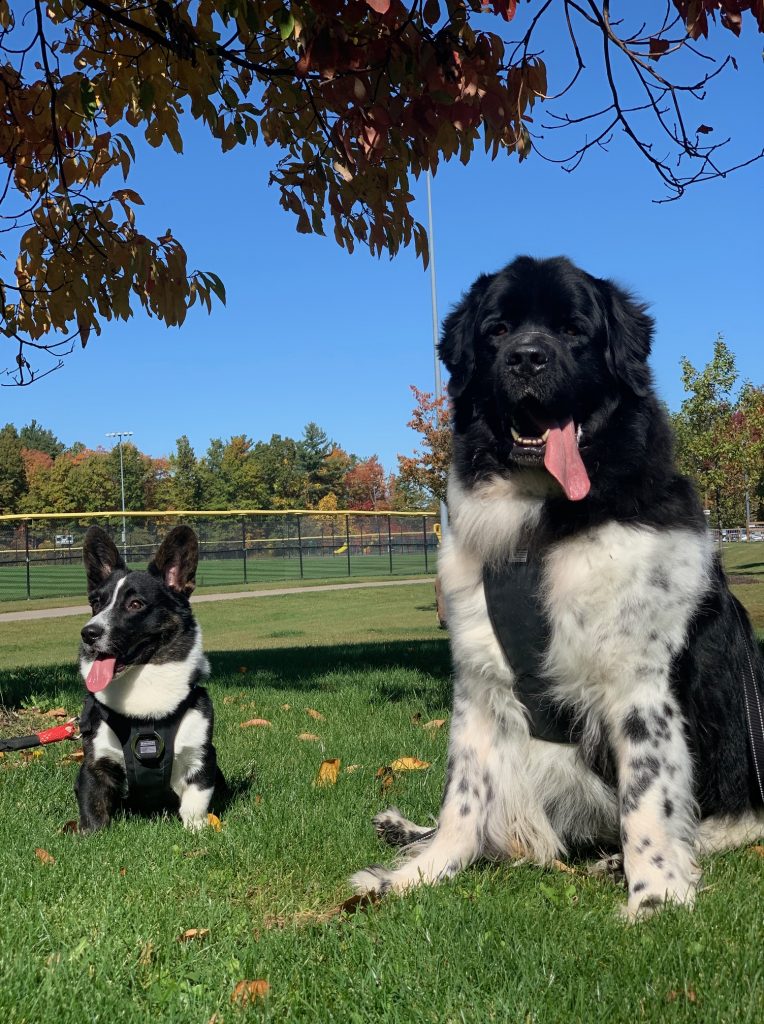 It was a cooler day and the grounds were a little wet from a previous night’s rain but it was still a beautiful day.

Finn makes me laugh when we walk because he stops and stares at every person that walks by us. 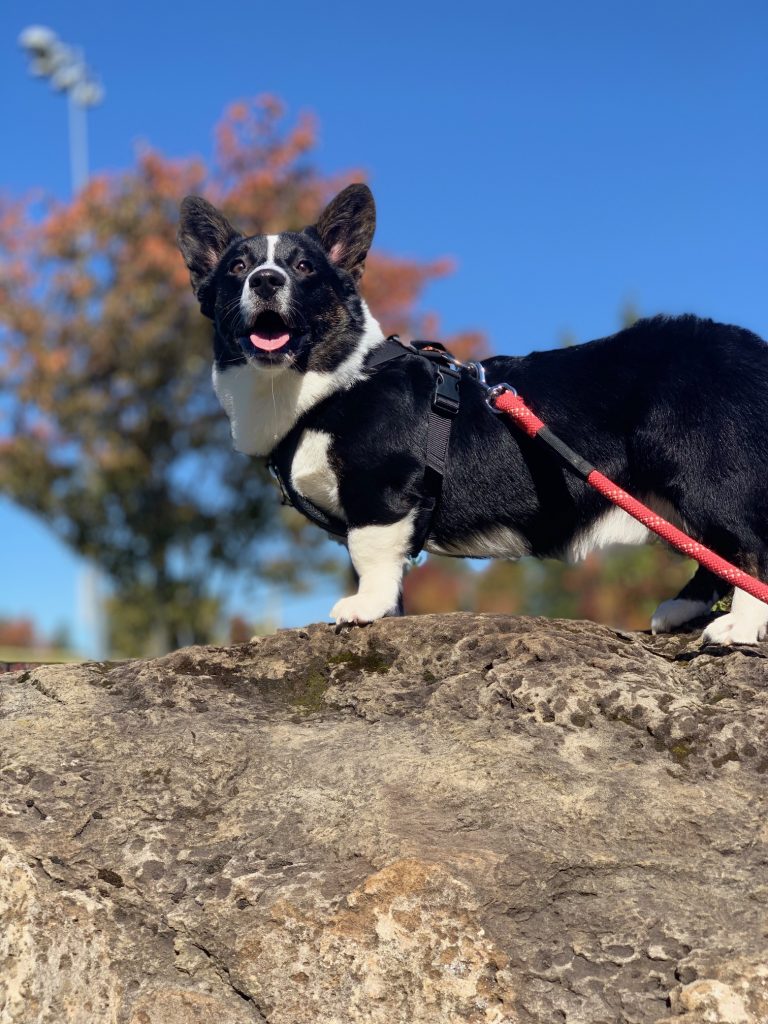 I took advantage of some pretty photo ops with both of them.

I like to expose Finn to as many things as I can right now when he’s young! 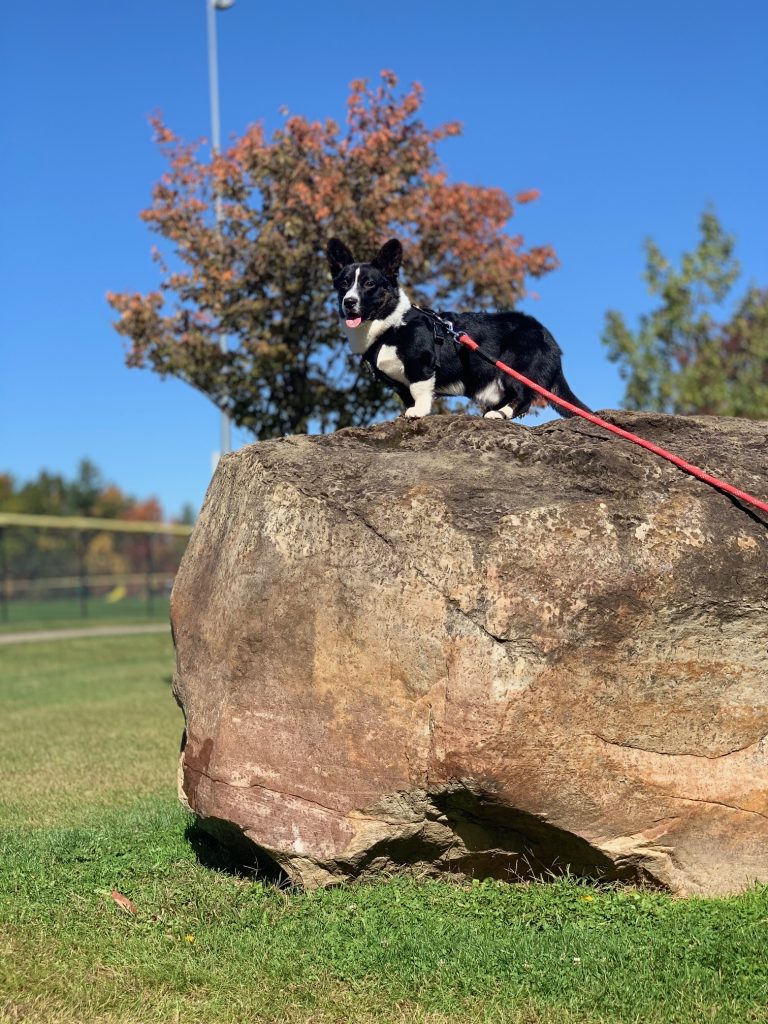 The next day Odin and went to a park that I haven’t been to in many years.

It was a place that I used to go to a lot with my dad when I was younger and I really had my heart set on going this fall to see the beauty of it. 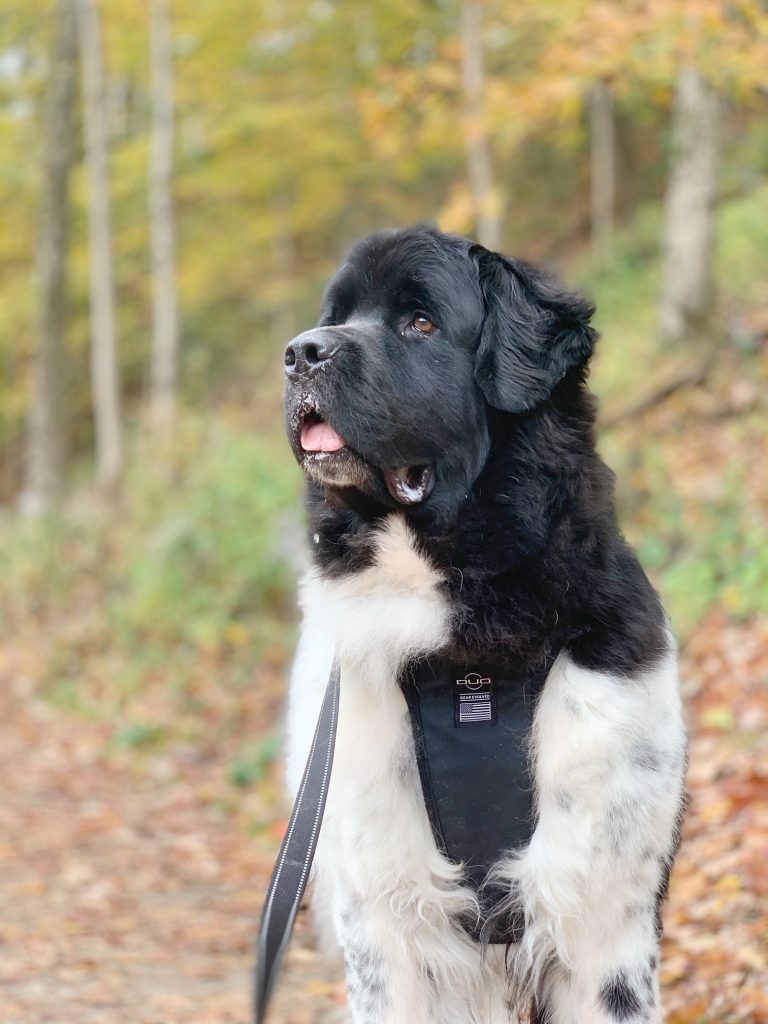 Odin was getting a little impatient when we drove out there because it was taking longer than usual and he started barking at me from the back seat.

He was happy and relieved when we finally got there!

I however, forgot how many wooden bridges this area had. 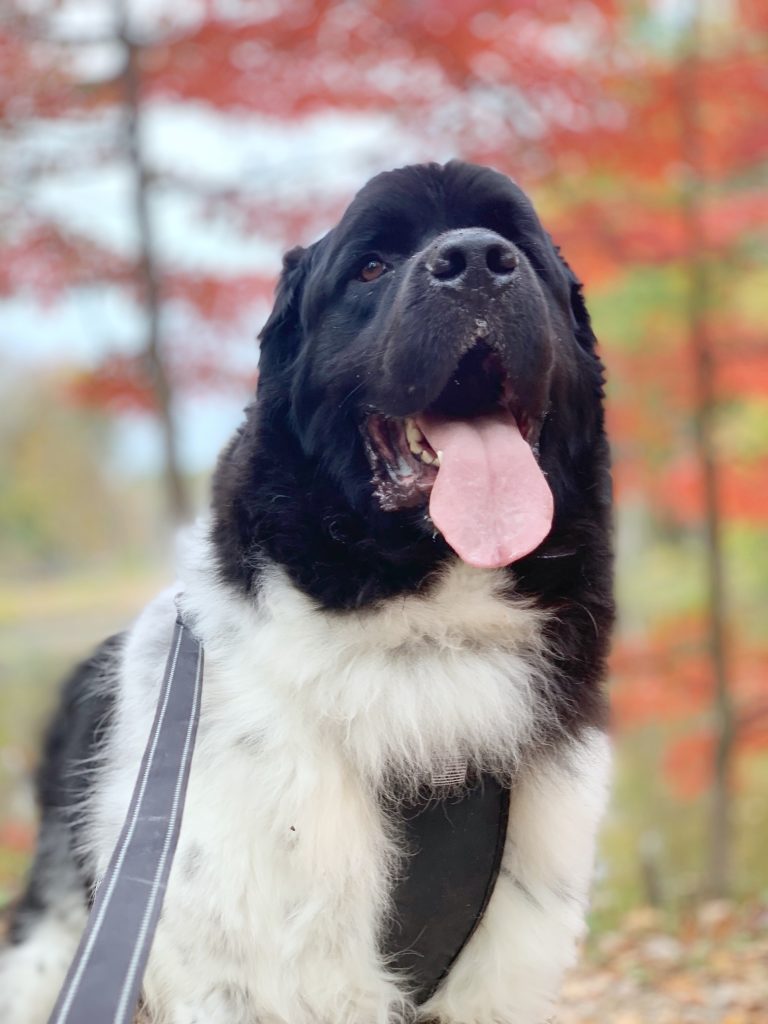 Any way you went on the trails there was a bridge and Odin wasn’t having it.

I had found a path that I didn’t think had any bridges and Odin was hurrying along taking in all the smells and I was taking in the beautiful fall colors.

Then I spotted a bridge up ahead. 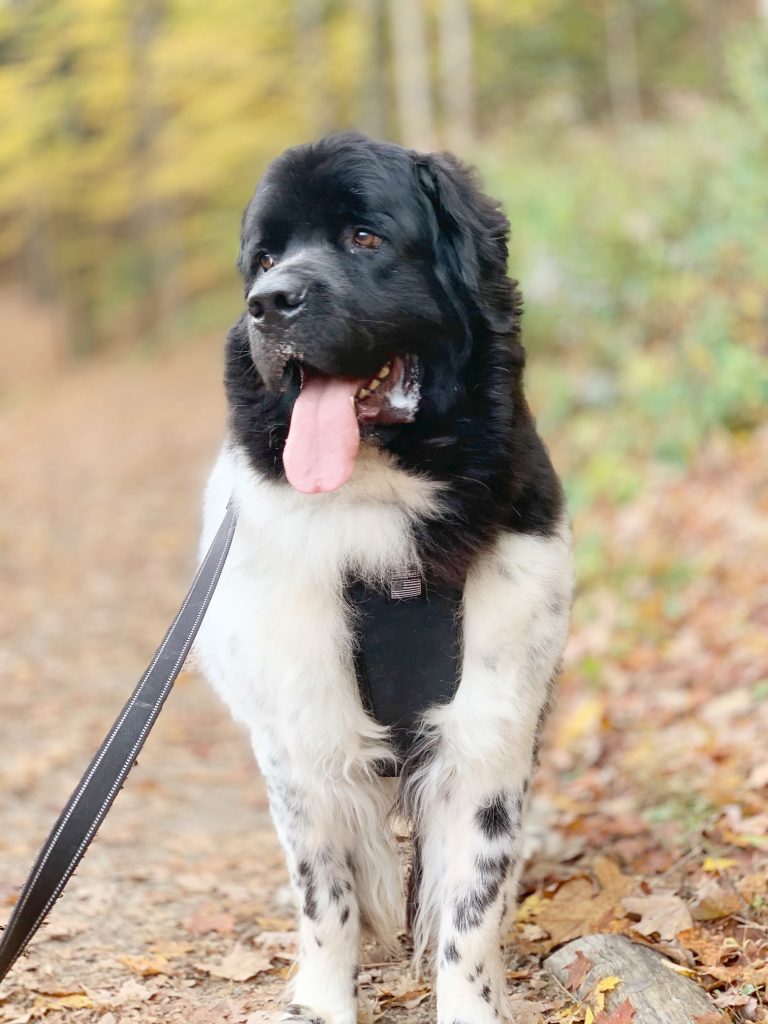 I briefly thought that maybe Odin wouldn’t notice it because his nose was to the ground and I just keep walking normally.

He did too until he was about 4 steps onto the bridge and then he stopped and shrunk.

He did a quick spin and headed off the bridge as fast as he could. 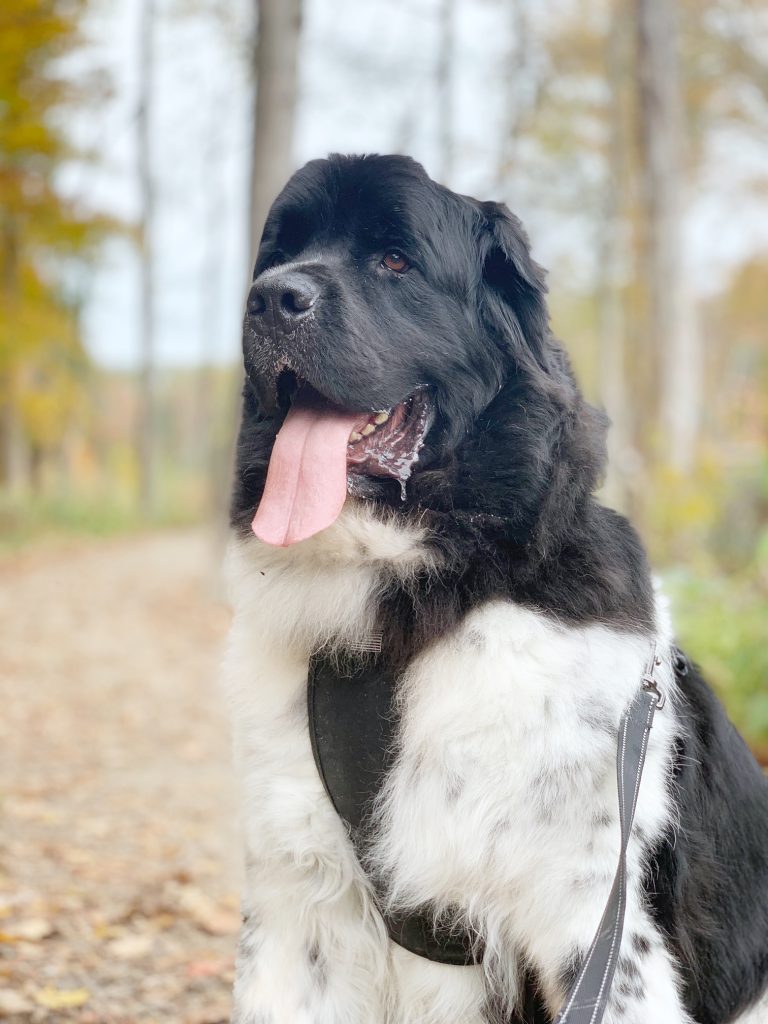 I was feeling pretty confident though, so we regrouped a bit, talked, and then headed back towards the bridge.

To my amazement, he went over the bridge.

He was nervous, but he did it and I couldn’t have been more proud of him. 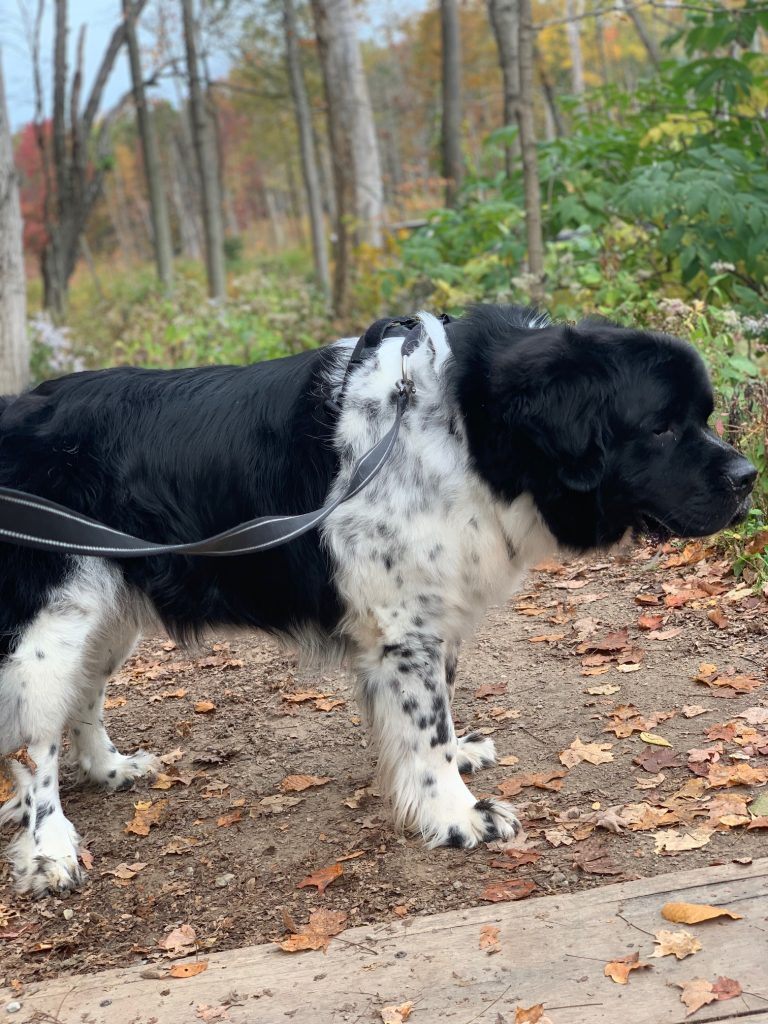 About 2 minutes later we came to another bridge and that was a big nope from Odin and I didn’t push it.

However, in order to go back, we had to cross the other bridge again.

This was when my confidence began to waver a bit. 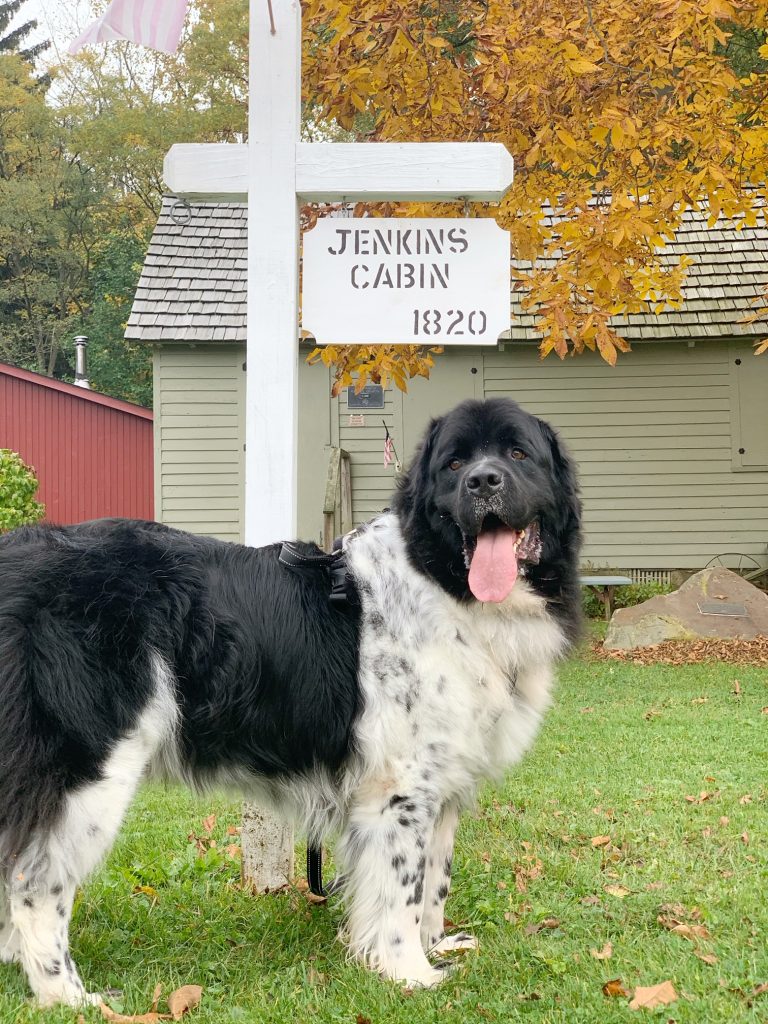 I did the same thing I did the first time, without breaking my stride, headed over the bridge with Odin by my side.

Odin wasn’t having it though and plopped his furry butt down right in front of the bridge and wouldn’t budge.

I assessed our surroundings. 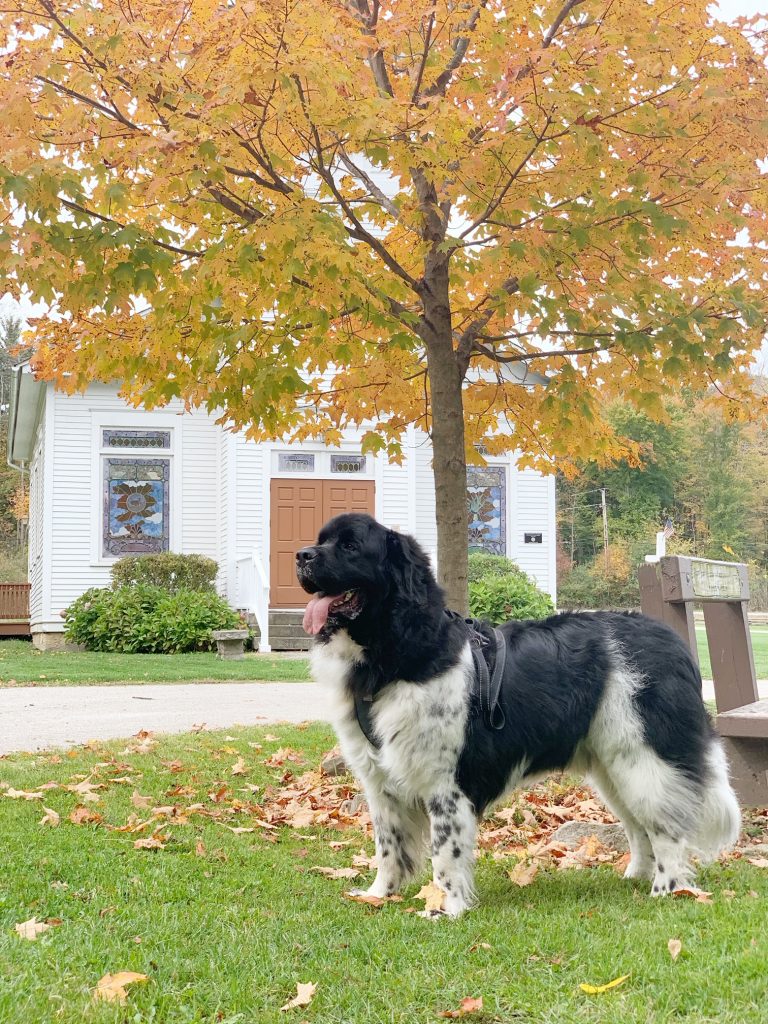 We had water on one side and a steep cliff on the other so avoiding the bridge wasn’t an option.

I also wasn’t going to force Odin because he doesn’t respond well to that so we just kind of chilled out for a bit.

I let him settle down and we tried again. 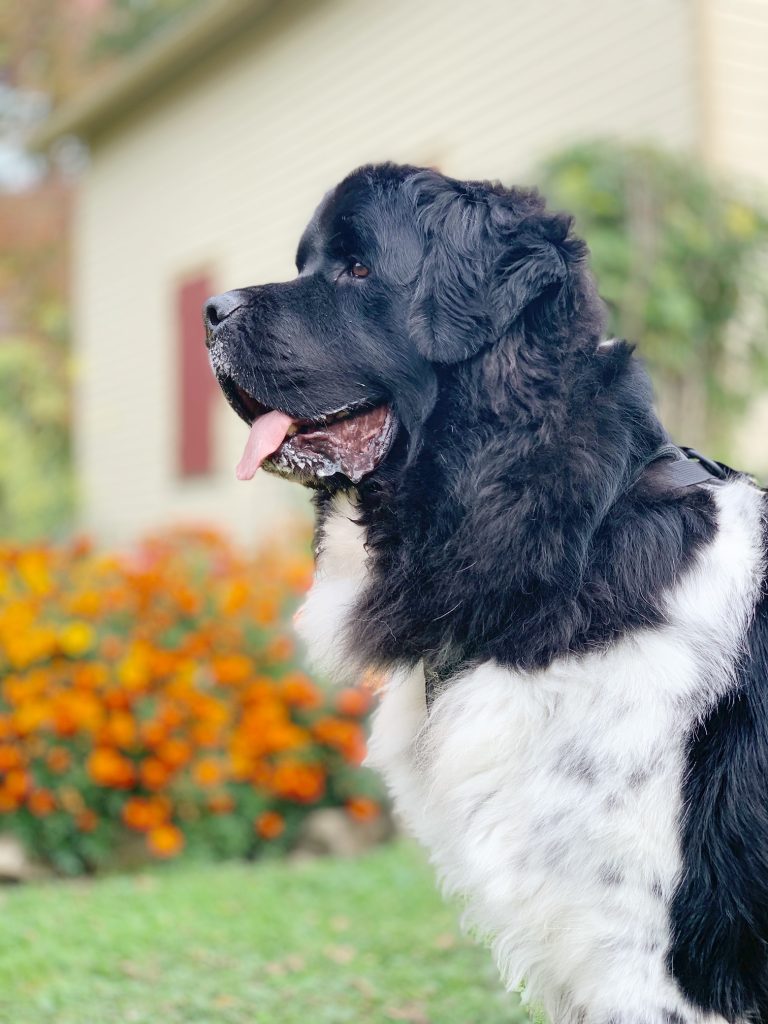 Finally, he went over it.

And that’s when I think he realized bridges weren’t so bad.

I don’t know. I had this feeling that he was ok with them.

Not in love with them by any means, but ok with them.

So we tried another one and he crossed without hesitation. 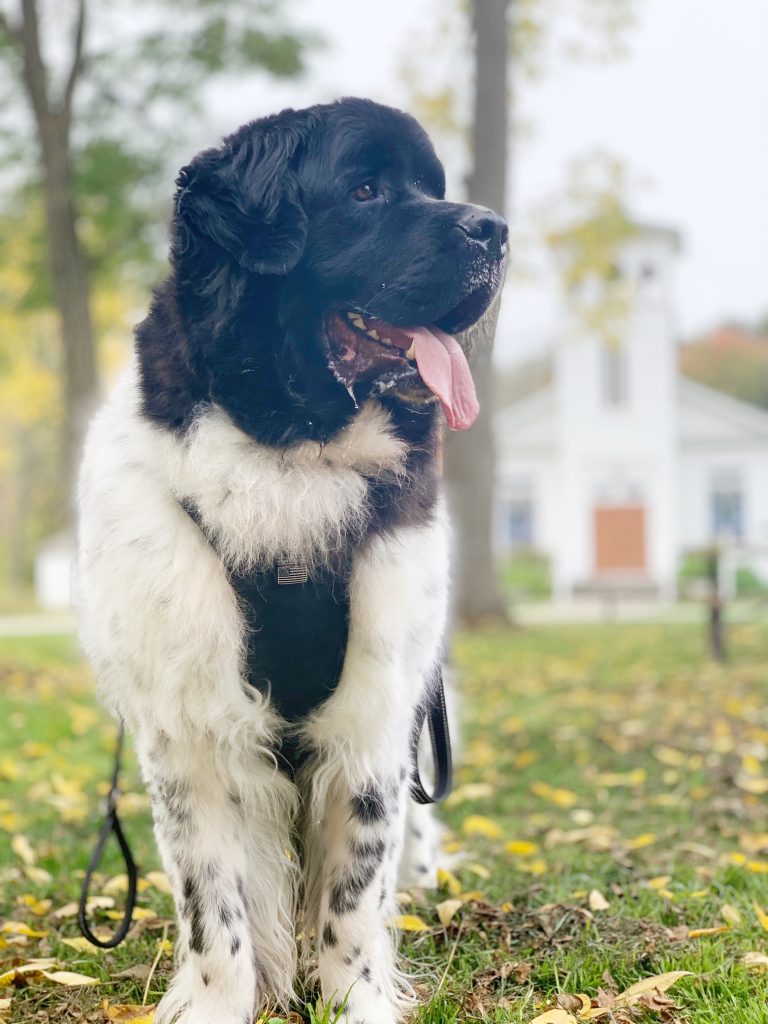 And then I stopped because I didn’t want to overdo it and set him up for failure.

That was a good day.

Another big breakthrough that I’ve had is more confidence and trust with Odin.

I don’t know if you’ve noticed, but in some of the pictures that I’ve been posting, I have not been holding Odin’s leash. 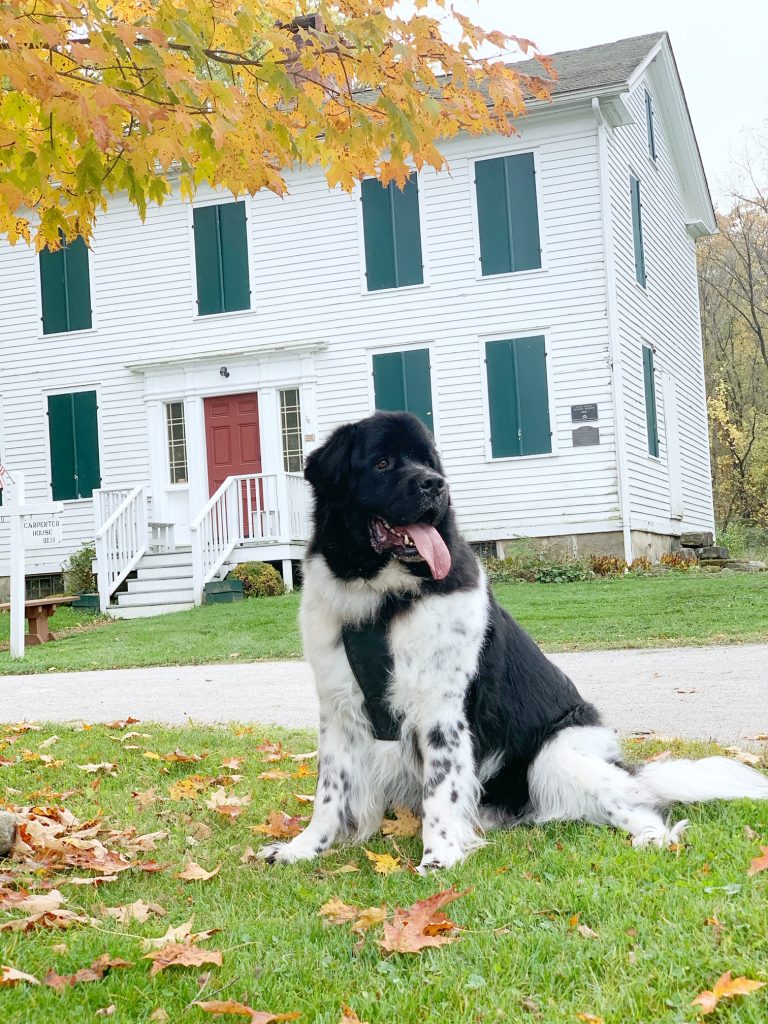 I have finally become confident enough to take a few steps away from Odin and trust that he’s going to stay and not high tail it away from me.

Don’t get me wrong, I am always aware of my surroundings and would never put Odin in harm’s way.

I don’t walk far away from him and I don’t let him run off-leash.

I trust him to listen.

After 1 year, I don’t think that Odin is a flight risk anymore and that’s huge for me because I have a lot of anxiety with things like that.

Our week ended with another beautiful fall day and a double walk. 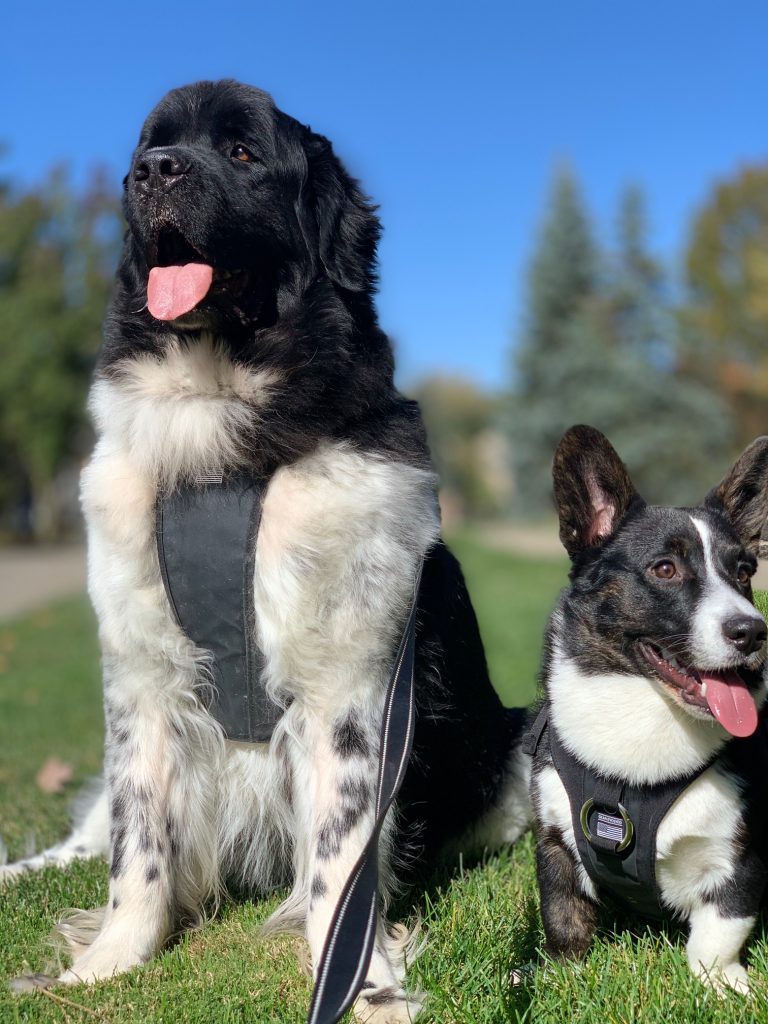 Next week isn’t looking so great with the weather so I’m happy that we got all this in this week!

I order a few new toys for both the boys and they’re arriving this weekend too!

Finn is a super chewer so I’m trying to get him things that last and that are safe.

His Future Is Bright And That Is Priceless

Geraniums Are Toxic to Dogs. I Didn’t Know That!