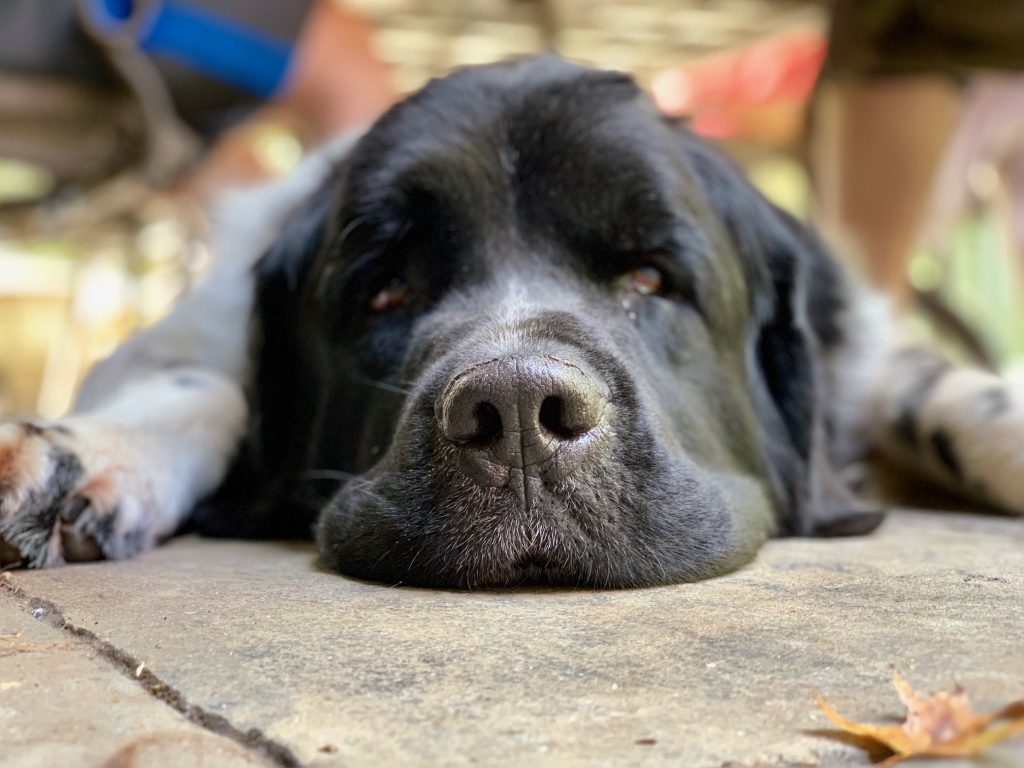 Odin is a 2 1/2-year-old neutered Newfoundland. His age is an estimate but it does appear that he’s around that.

Odin is a Landseer and a beautiful boy.

He’s warming up very well to our home for only being here for 1 full day.

He is definitely a people dog and just wants to be around people and be loved. I’m absolutely certain that he’s going to be a velcro Newf but not to one specific person. He likes everyone.

He’s very calm and laid back.

He weighs about 110 pounds.

Leroy and Odin are still trying to figure each other. Leroy is definitely interested in Odin but Odin is a little unsure of Leroy at this point. I think that they will be great friends really soon and Leroy has already perked up some which is what I was hoping for. 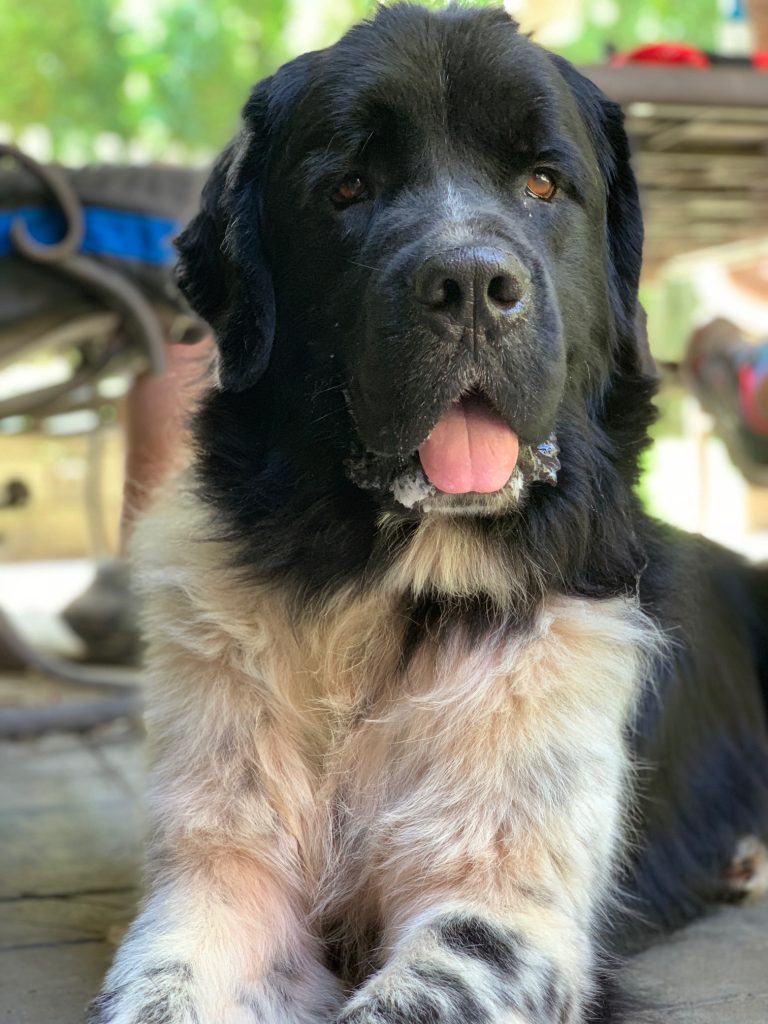 Odin came from Newfoundhaven in Oklahoma.

He was rescued in the beginning of August along with his brother Olaf who is a 1 1/2-year-old brown Newfoundland.

I don’t know who Odin’s breeder was but he and Olaf came from the same breeder if that tells you anything.

Odin was a family dog until his owners had a baby and then he was put outside.

He roamed the area with his brother often being gone for several days at a time.

They had a tendency to wander onto a neighbor’s property where they were not welcomed and were shot at with pellet guns.

Odin and Olaf were not a bonded pair. Olaf was more dominant over Odin and Rachael from Newfoundhaven felt they would each do better in different homes. 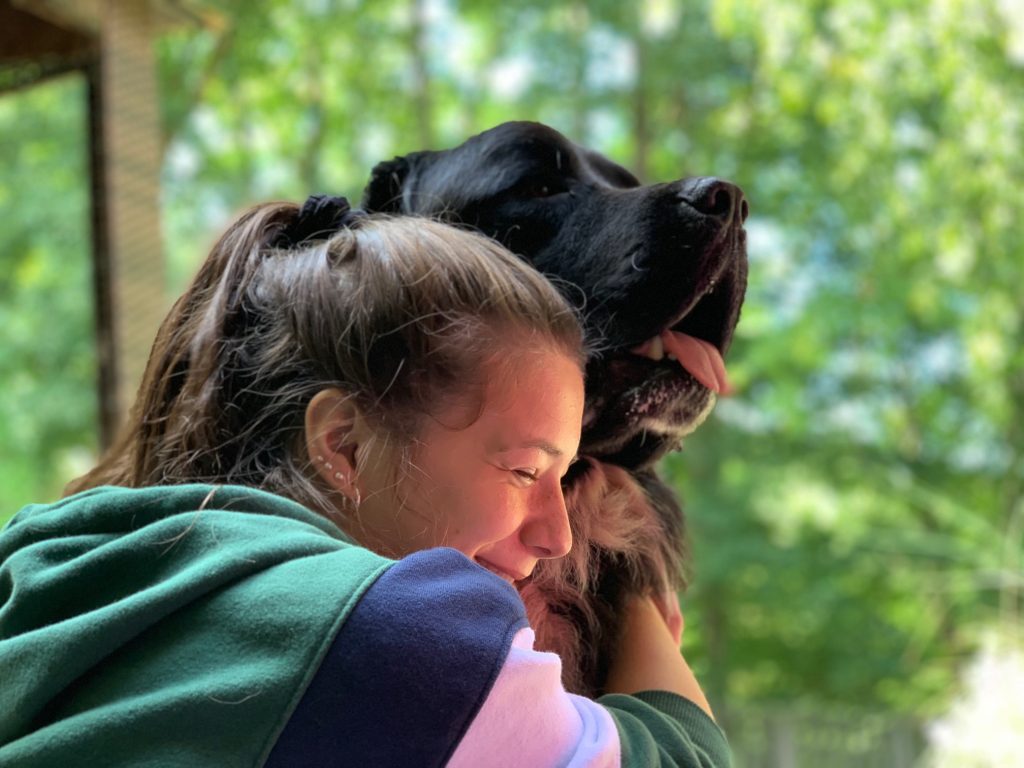 I saw Odin’s profile on the Facebook Page of Newfoundhaven before Sherman passed away.

He caught my eye immediately and so did his profile.

When I first saw him I sent his picture to my husband who also thought he was a good looking boy.

He told me to put in an application but I didn’t think it would be wise to do so at that time.

Bringing an adult Newfie into the house is totally different than bringing in a puppy and I thought it would bring too much anxiety to Sherman.

Odin’s picture kept appearing on my timeline and I kept staring at him each time he would pass by.

A few days after Sherman passed, Odin’s picture once again showed up in my feed. 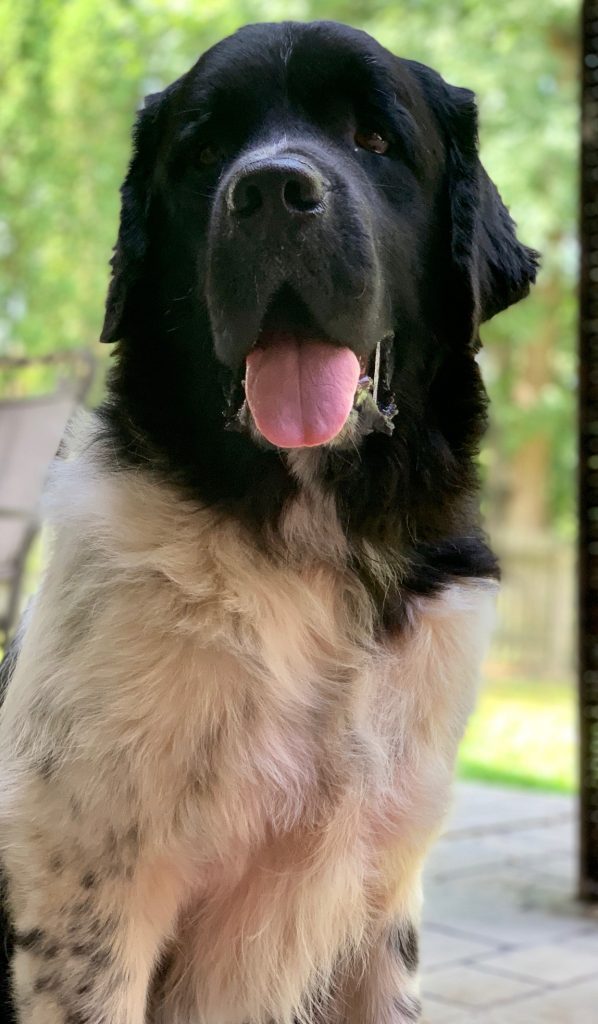 This time his profile had said that he had received a lot of applications but none of them seemed like a good fit.

I wanted to fill out an application but at that time there was no way to get him to us and I wasn’t able to make a trip to Oklahoma at this time.

That’s when I decided to share him on our Facebook page, hoping that one of our wonderful friends would see him and adopt him.

Things went a little crazy after that as everyone started telling me to get him.

Offers to transport him by some of our friends started coming in.

It was as if it was meant to be so I filled out the application. 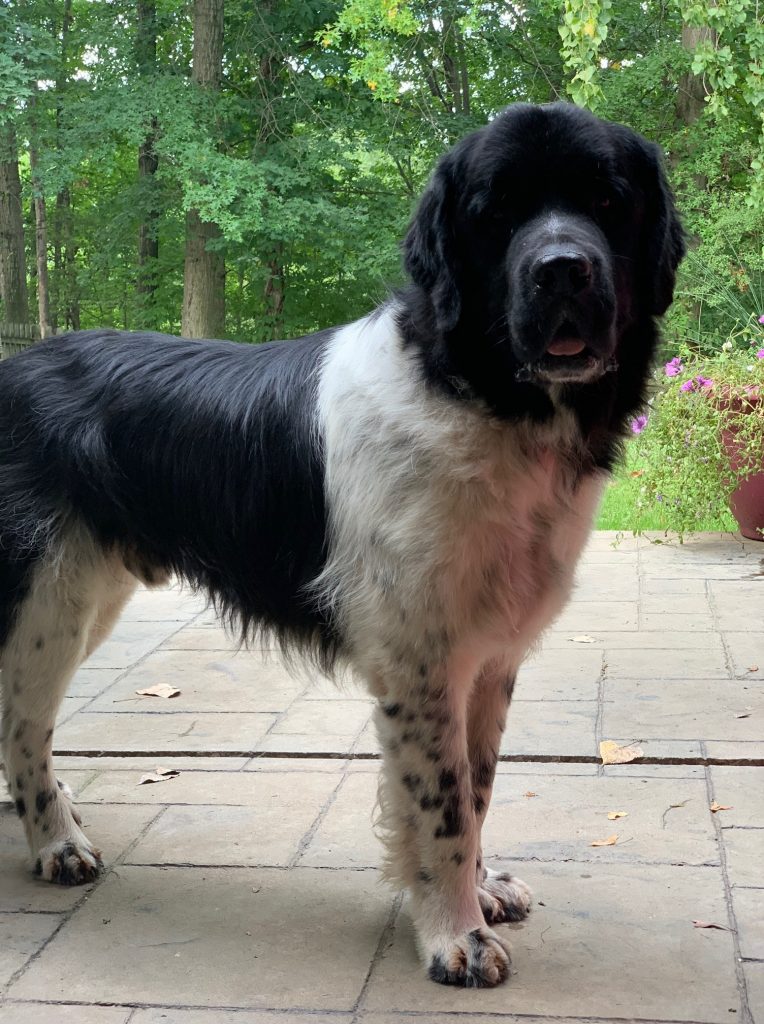 I could have easily talked myself out of it like I do with many things but I decided to let fate take over.

After a day went by, one of our friends reached out and said that they knew of a transport service that may be able to get Odin to us.

I spoke to Rachael about it and we decided to check it out.

Rachael is pretty hesitant to do transports because she had a bad experience with it one time but after doing all of the research that we could we decided that it was the best way to get Odin to Ohio.

And that’s what happened on September 7th.

I know many people are interested in the way we transported Odin so I’ll try my best to explain it.

Odin’s transport was 100% provided by volunteers of SNARR transport.

SNARR is a special needs animal rescue and rehabilitation organization.

They focus on animals least likely to receive another chance due to physical, emotional, or health issues but they also do transports for dogs in need all over the country.

They have a person who is solely in charge of organizing these transports.

She sets up the route and has a wonderful team of people that participate in the transport.

Not every transport uses all of her volunteers though, you can invite your friends to participate in the transport too. 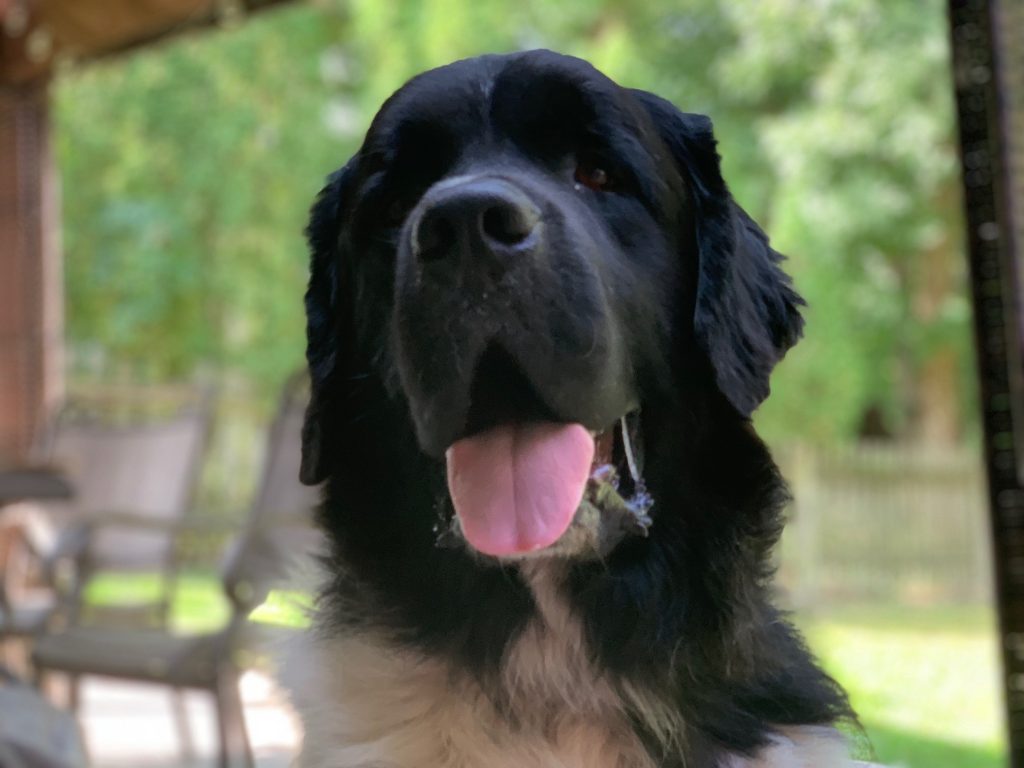 In order to do so, you have to fill out an application on the SNARR website.

Since Odin was coming so far and had 11 legs that needed to be filled, Rachael and I shared the transport information with our friends in hopes to get some people that are familiar with the Newfoundland breed on Odin’s team.

Odin’s transport spots filled up quickly, within a few days of the route being posted.

Rachael had the first leg, I had the last leg and 9 other people volunteered.

It was a mixture of the SNARR team and our team.

It was all very organized and everyone set up a time, a meeting spot and we all had contact with each other by cell phone or in a FB group just for this transport.

We had a few people, like me, that had never done this before but it all went smoothly.

Odin’s transport was completed in 1 day. He left Oklahoma at 7 am.

Each person who had a leg in the transport drove a little over an hour to the next handoff and there was a time change in between. 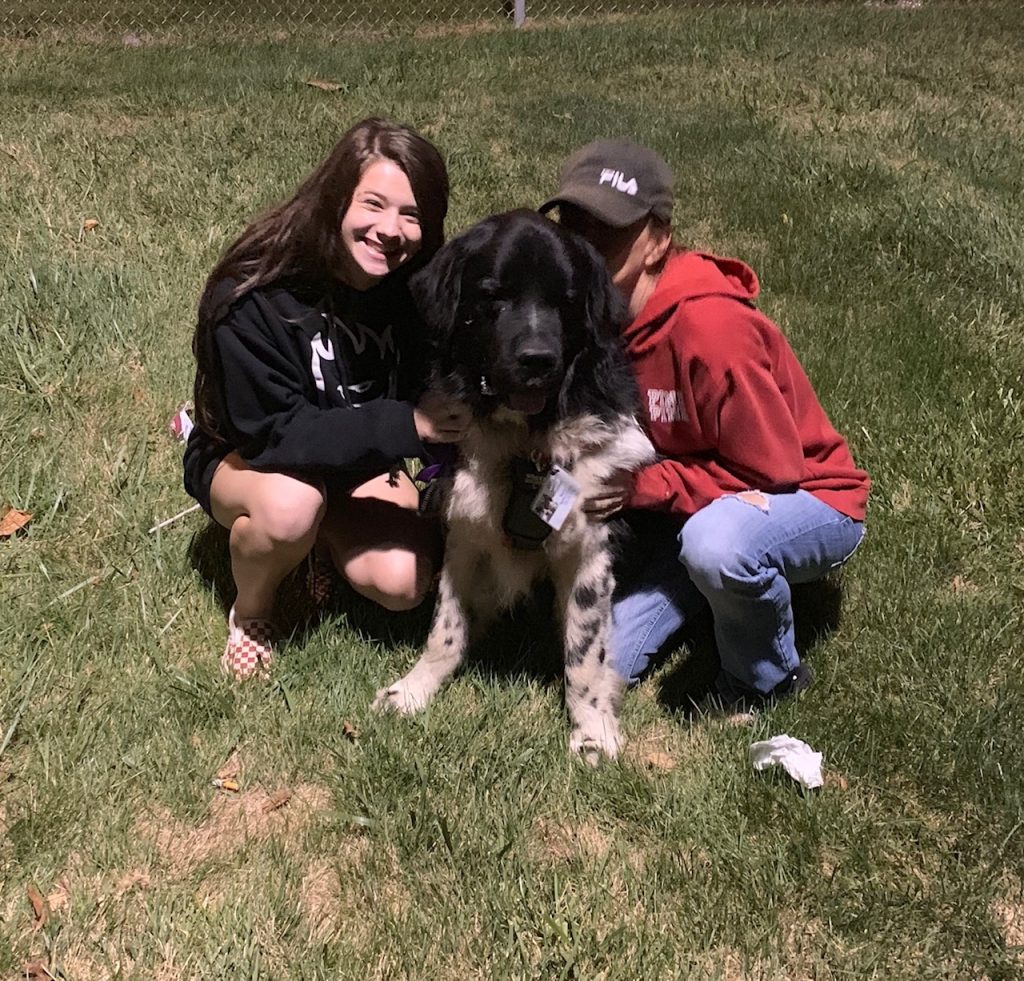 Odin arrived to us in Columbus, Ohio at 10:30 pm and we then drove him the 2 hours back to our home in Strongsville, Ohio.

Everything went seamlessly during transport.

Odin was tripled leashed, had a harness and collar on and numerous name tags.

He also had a health certificate issued before transport.

Odin was super chill for each leg, given water, treats and walked each time.

Most people would take a picture at the time of the next transfer and post it in the group and update if they were on time and how Odin was doing.

It was so awesome to watch.

Everyone would also check-in when they were safely back home. 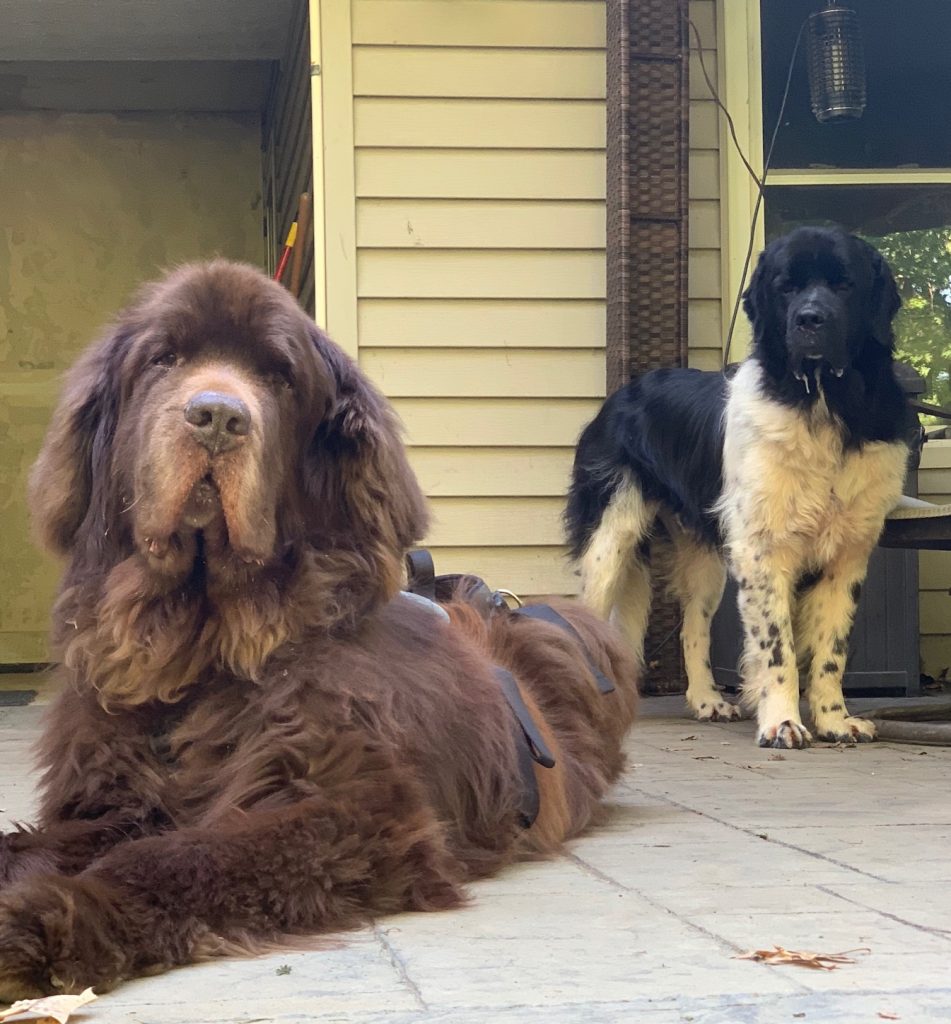 I can’t even begin to thank everyone for volunteering their time on a Saturday to get Odin to us.

The world is filled with amazing people!

Special thanks to SNARR and our friends here that were able to hop on Odin’s transport!

I had no idea that transports such as this existed.

I know you can pay for transports and that rescue groups usually have a rescue transport team but I didn’t know about SNARR.

If you are ever in the same spot as me, I could not recommend them more.

I would, however, be very cautious when looking into any type of transport.

I’ve read many horror stories that can happen such as transports being left on the side of the road or never making it to their destination.

I spoke with the woman in charge of our transport extensively and also checked how previous transfers had gone. We made sure that everyone knew that Odin was a big, strong dog, needed water and needed to be kept cool.

I was on pins and needles that entire day but it turned out to be such an amazing and obviously rewarding experience. 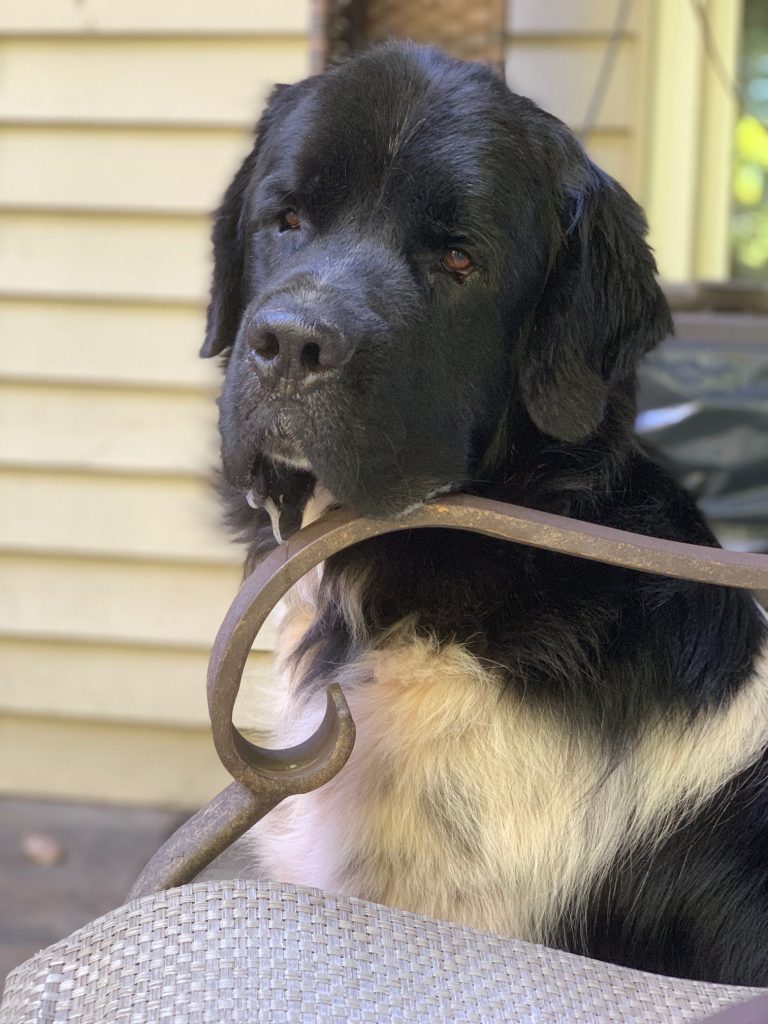 Why a rescue for us?

I’ve been considering a rescue for a while now but was kind of putting it into the hands of fate.

I was looking to adopt a brown Newf but then Odin happen.

As many of you know, my first Newf, Thunder, was a Landseer.

He came before Sherman and Leroy and I guess one will come after too. 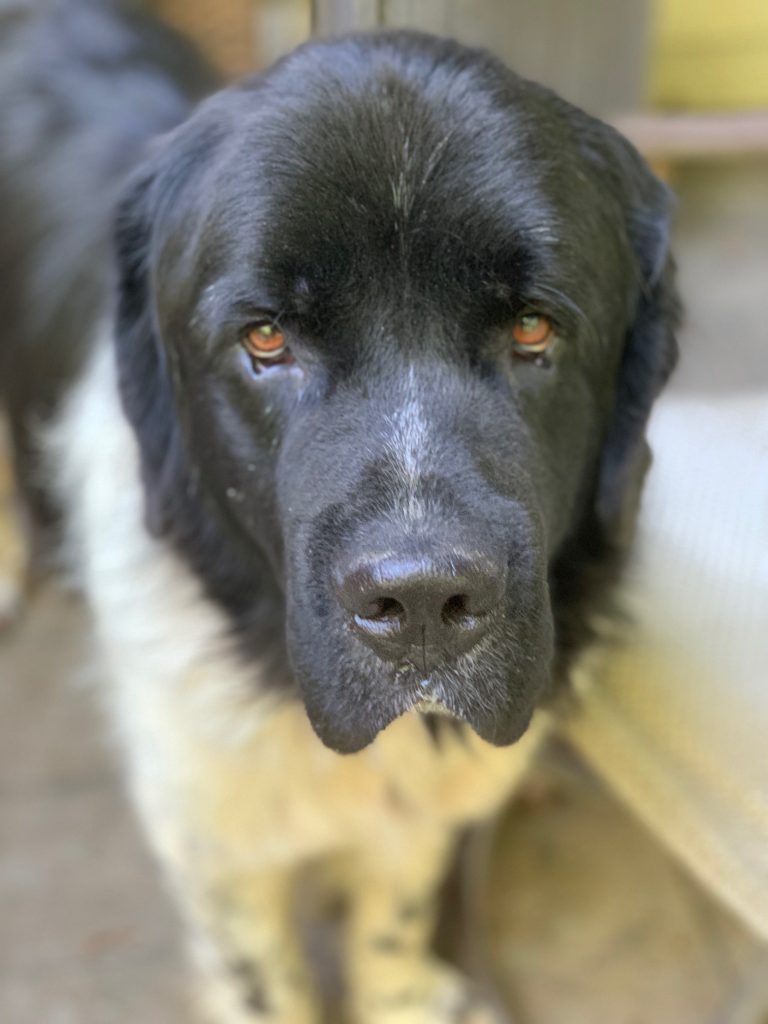 We still have plans to get a brown puppy next year. That hasn’t changed.

Some other questions that some people have had:

Is the blog name going to stay the same?

Yes. For now. I really don’t want to think about changing it right now.

It is weird seeing a white and black Newf in my feeds but I’ll get used to it.

How is Leroy with Odin? 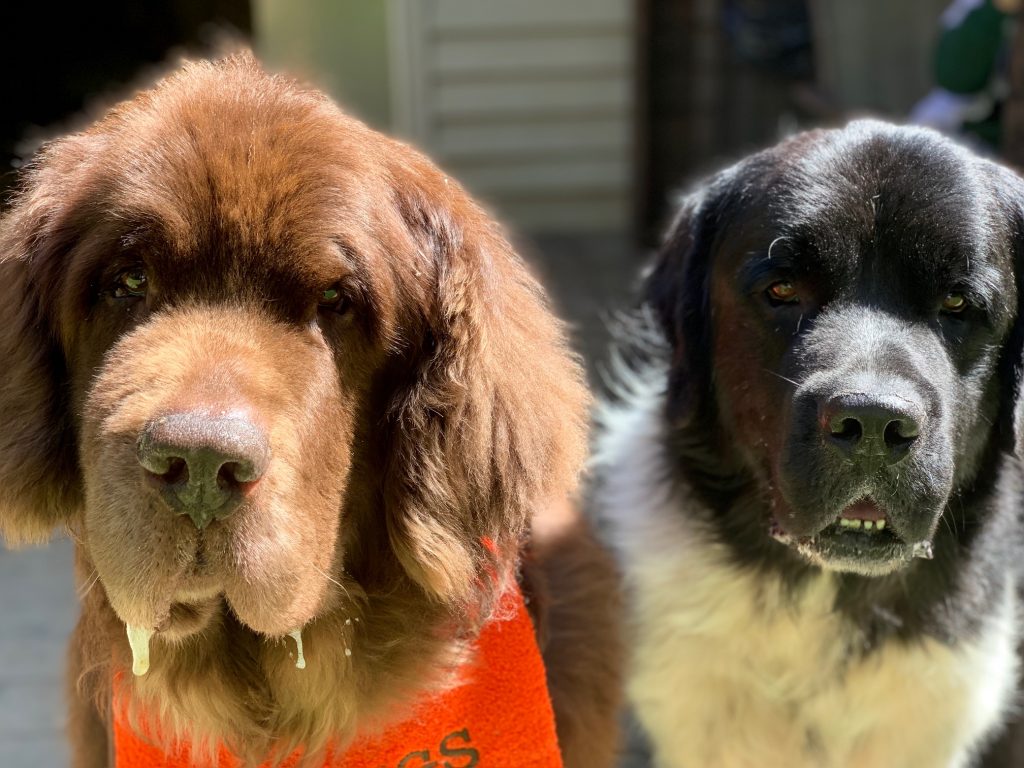 Leroy is doing exactly what I hoped he would do and being super chill.

He’s checked Odin out and has to pee everywhere that Odin does.

He’s intrigued but he’s not being pushy.

I can’t wait to see them bark at each other.

Leroy has also perked up.

His poops are solid still and we’re working on getting that edema out of his leg.

I think all the peeing back and forth is totally helping!

He likes to play with toys. 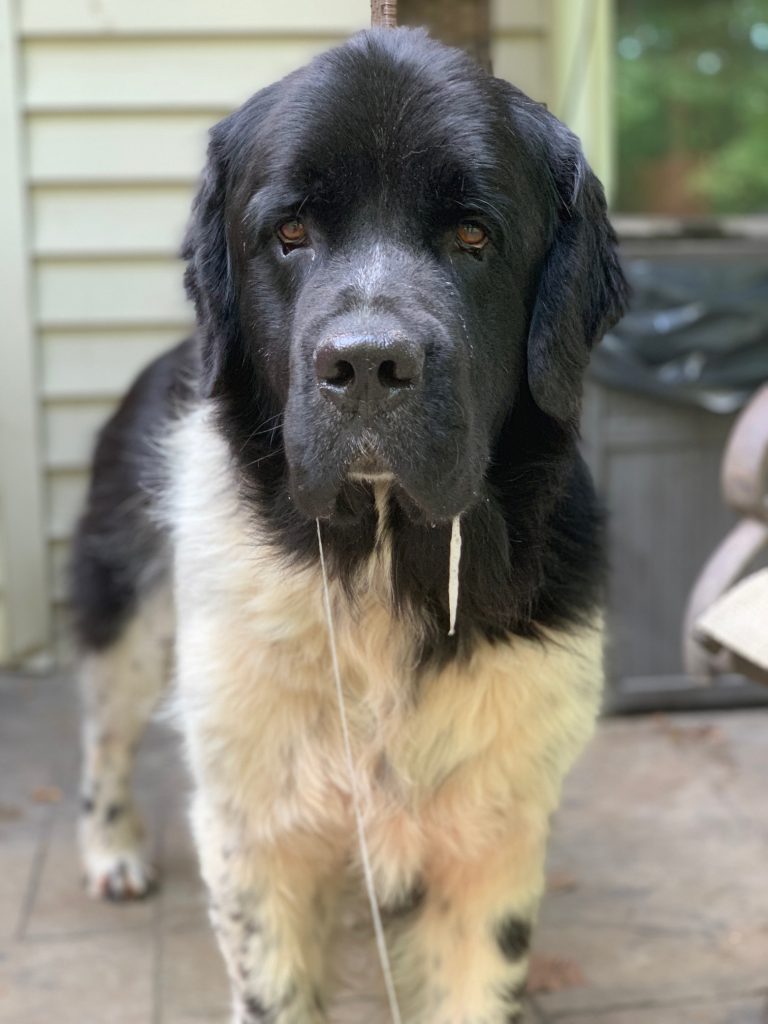 He’s afraid of the steps so we’re slowly working on that.

He’s very smart and observant from what I can tell right now.

I think that’s it for now!

Please feel free to reach out if you have any other questions!

What Happens In Florida Does Not Stay in Florida
Tags: Dog, Volunteers

What I Really Want For Mother’s Day Won’t Cost A Thing. #MDayYourWay!