As I’m sure many of you can tell, October and Halloween are my favorite time of year. It’s almost like my brain comes out of hibernation and begins to thrive and think again. Maybe it’s because I don’t have to worry about the dogs overheating anymore.

Or maybe it’s a distraction from the looming holiday season.

Whatever it is, I love it and I’ll take October over any month out of the year.

I can’t pinpoint one single thing that I love most about October, it’s a combination of a whole bunch of things.

One of my favorite things for the past 10 years has been dressing Leroy up for Halloween. It’s just so easy to do and fun.

It’s not just about putting Leroy into a costume and taking a picture. It’s the whole process that goes into.

Dressing up a big dog for Halloween is a challenge in itself. Most of the time you can’t go to the pet store and pick up a costume or order one online.

You have to think outside the box. Shop at regular people stores, dismember dolls, use what you have around the house and make it into a story.

When we first started out we started off weak, then we rebounded, then we took a break and rebounded again.

Here’s a look back at some of Leroy’s past Halloween costumes: 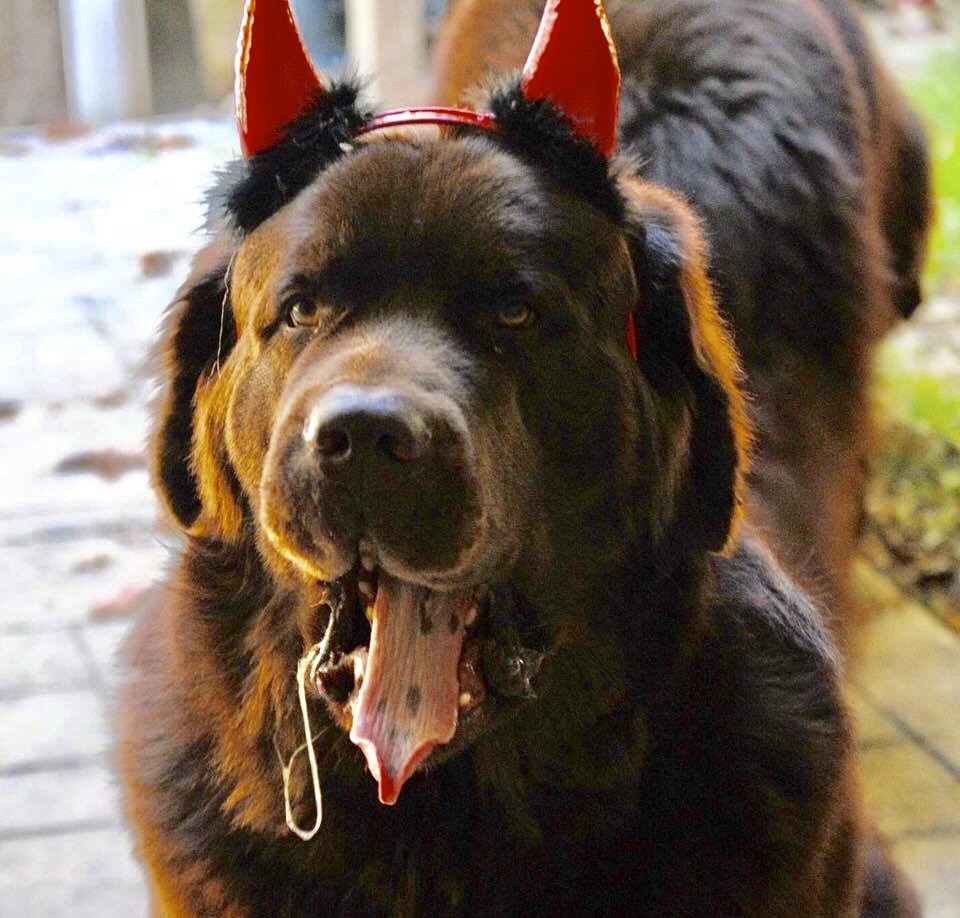 Inspiration: Leroy was going through the teenage years and I was convinced he was the devil’s spawn.

Time invested: 30  seconds and then he tried to eat the ears. 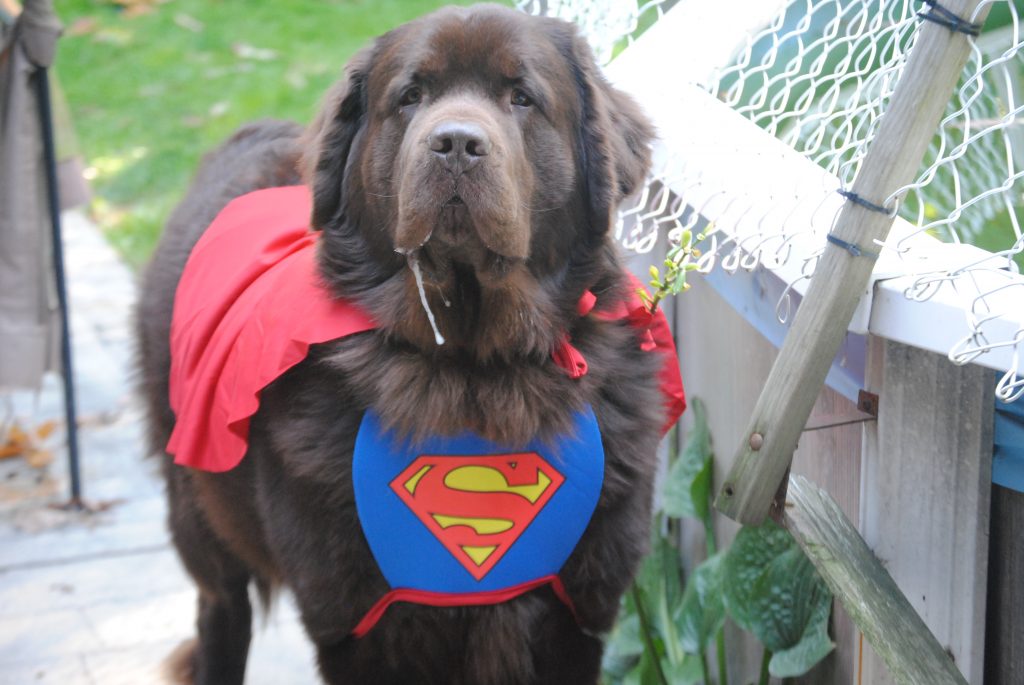 Cost: Free. We won the costume in a contest that a fellow blogger was having

Inspiration: Leroy THOUGHT he was an actual super dog 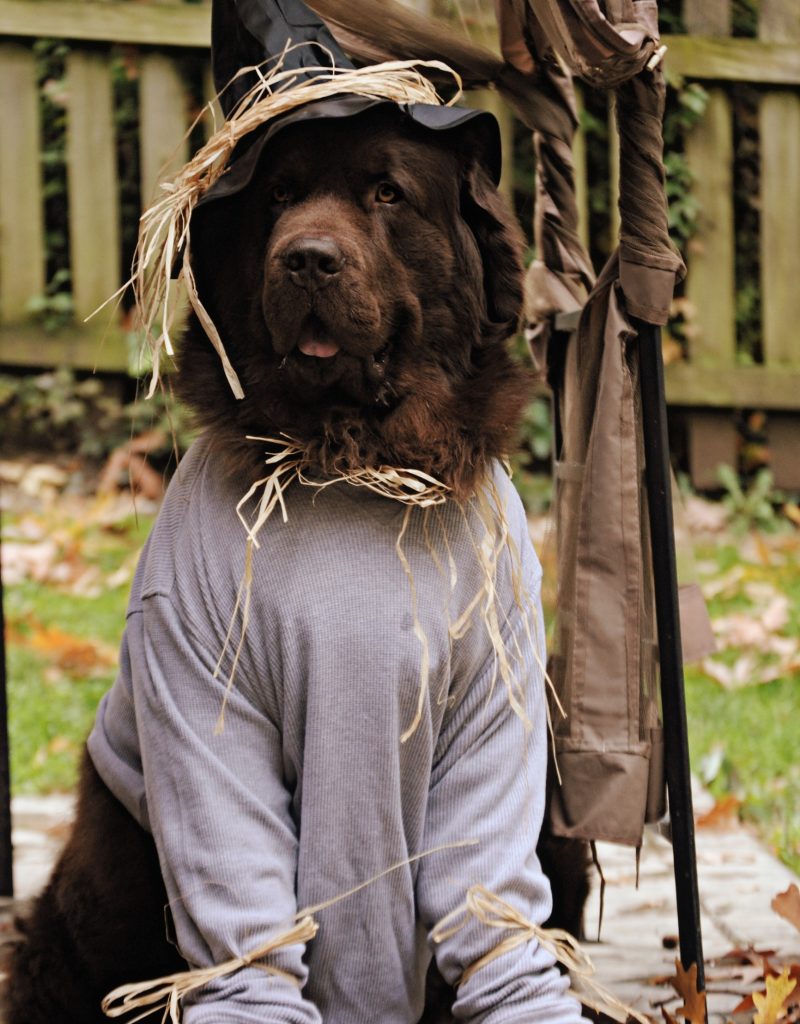 Cost: $2.99 for the witches hat. The shirt I stole from my husband (XXL), the straw we had to cover up the mud in the backyard and the twine we had on hand also.

Inspiration: We were still deep into the teenage years and we were trying to figure out if Leroy was mentally challenged or if he was too smart for his own good.

Time invested: About 30 minutes. Leroy cooperated but the straw did not. 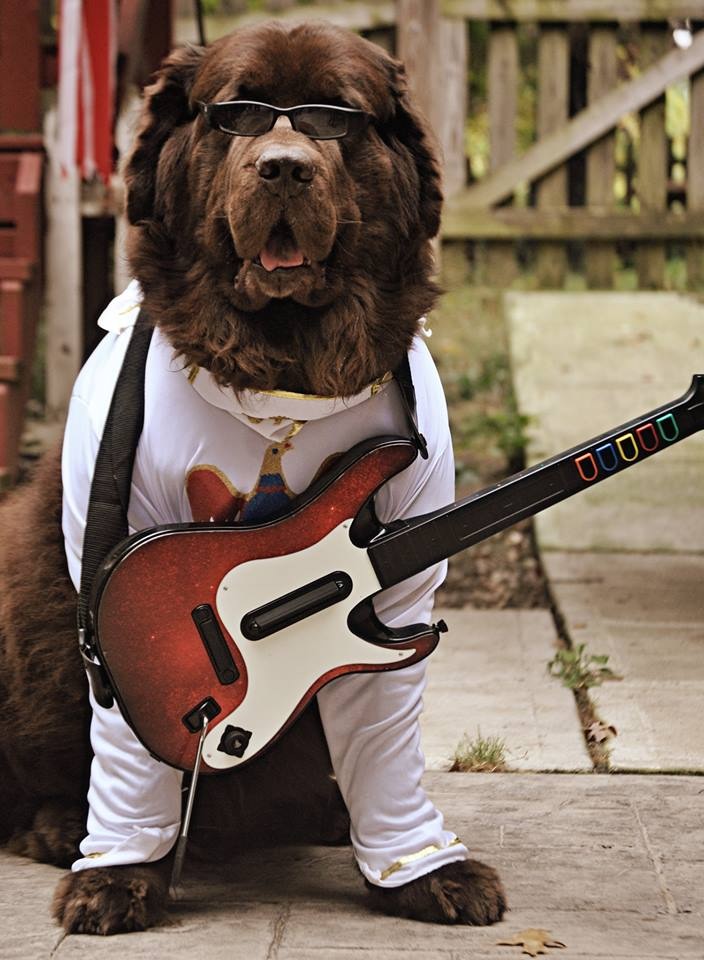 Cost: 0 dollars. This was my son’s Halloween costume from the previous year. Size medium adult. The guitar was from some video game.

Inspiration: My love of Elvis and dogs.

Time invested. About 10 minutes. Lack of scenery on my part was to blame for the short time.

In 2014 we took the year off because Leroy was in recovery. He probably could have tolerated dressing up but I didn’t have it in me.

The Newf of Sleepy Hollow 2015 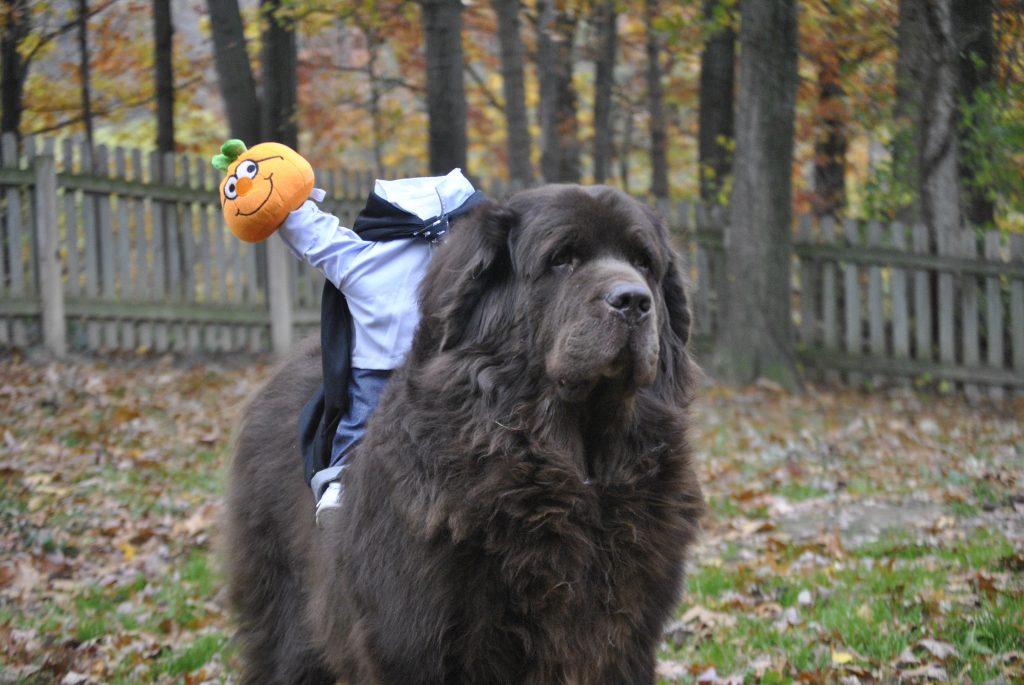 Cost: My patience and 0 actual dollars.

Inspiration: I was running dry on ideas and I saw a Newf online that had done this so we created our own version. Our version was a Halloween doll that I cut the arms off of and then stuck long toothpicks in styrofoam inside the sleeves and attached a pumpkin dog toy that we got for free from PetSmart. 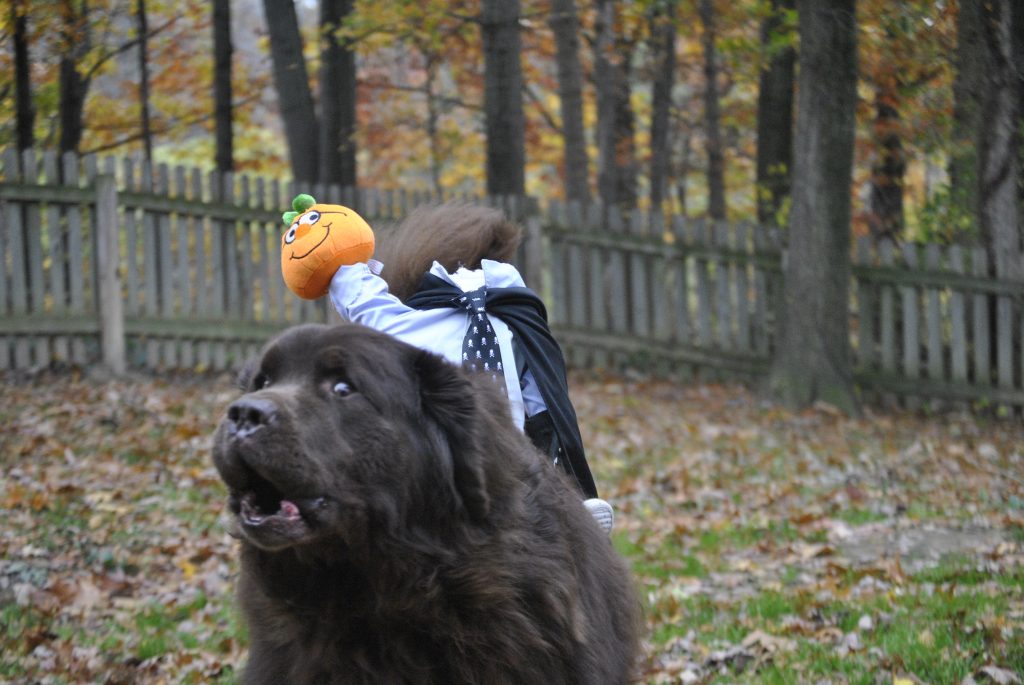 Time invested: I lost my patience somewhere in between Sleepy Hollow and the Hudson River because I couldn’t find a solid way to get the doll to sit on Leroy’s back without falling off to the side. I tried a harness, a backpack, string….you name it. It took at least a thousand tries and several days to get it right and getting it right was just luck. We still have the headless doll in the closest. 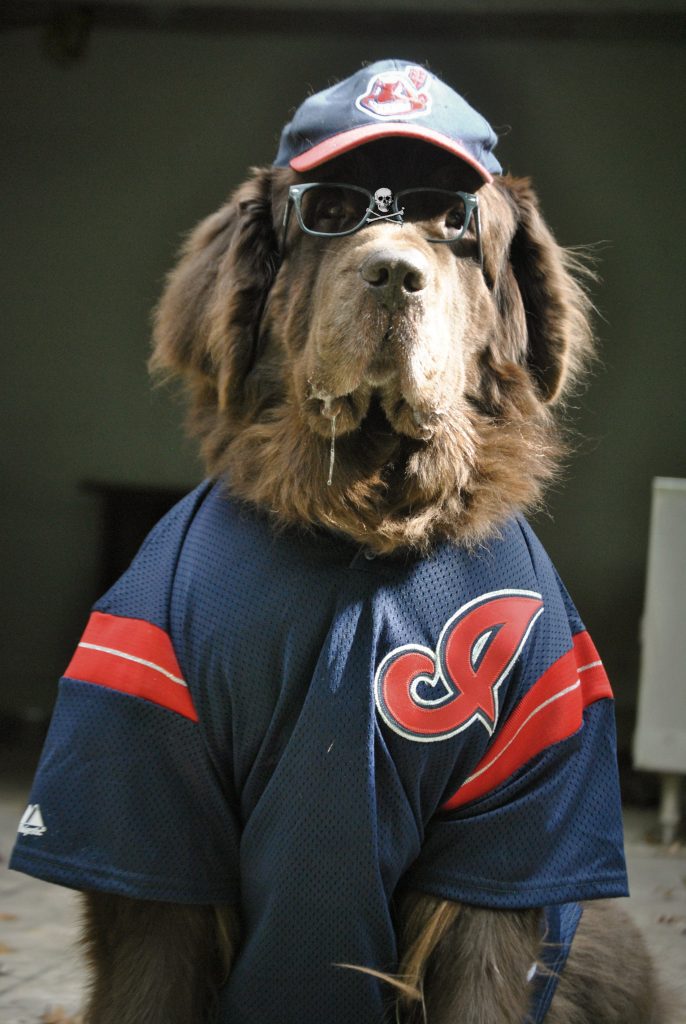 2016 we skipped because I couldn’t get my shit together. Leroy was supposed to be a train conductor and I had it all planned out. I bought a hat on Amazon for $12.99 and we had a bandana. He was going to sit on an actual replica of a train. 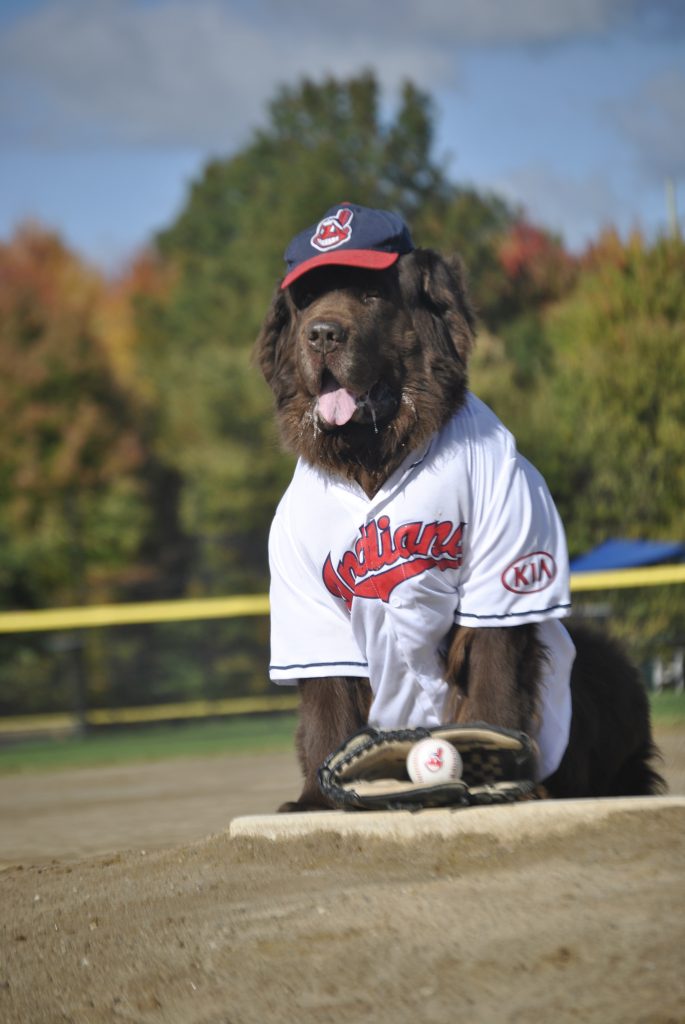 When it came down to it I backed out because I didn’t feel it was safe for him. However, we recovered in November when Leroy hit the baseball field dressed as Wild Thing to celebrate the Cleveland Indians being in the World Series.

Time invested: About an hour which included a walk around the ballpark. 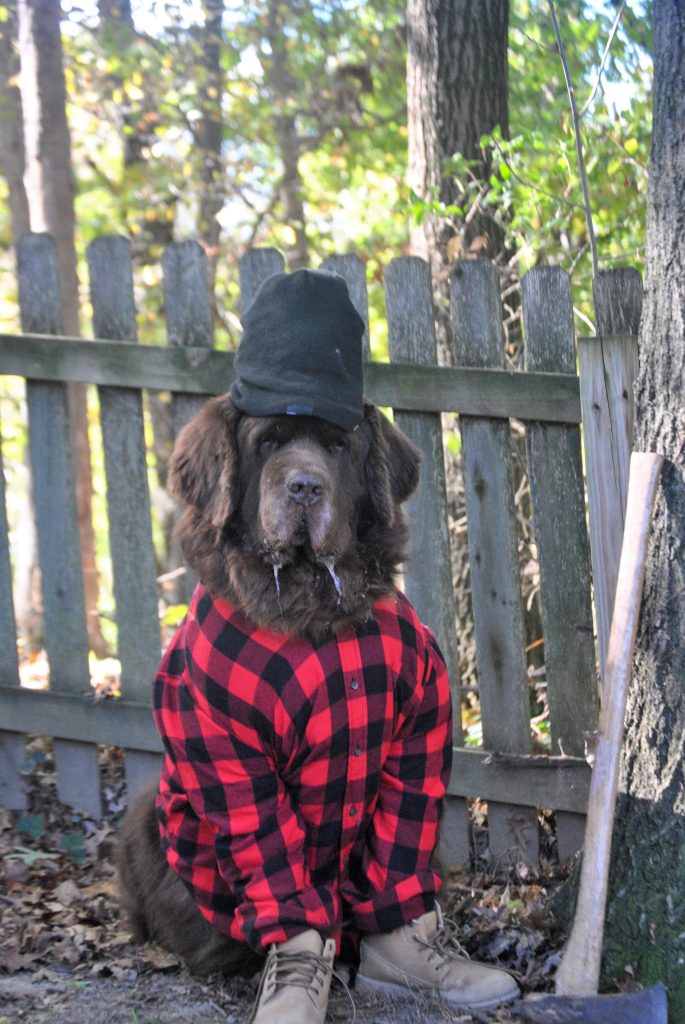 Cost: $14.99 for the flannel shirt (XL-should have gone bigger) that I washed and gave to my dad after we were done with it.

Inspiration: The Brawny paper towel guy. I just saw him on the package one day and said, “That’s it! Leroy’s a lumberjack this year!”

Time invested: About 15 minutes. Getting the hat to stay on was a time sink.

2018. This year’s costume is a little more low key but it goes with what Leroy’s been through this year. I did purchase an adult one-size fits all costume for $11.99 and it comes with most everything that I need. There will hopefully be a scene to go with it.

How do I get Leroy to sit for these pictures?

Over the years Leroy has learned that the quicker he sits and stays, the quicker the treats get into his belly. Commands that I use sit and wait with my hand held up in a stop.

Should I Get Gastropexy To Prevent Bloat In My Dog?