Many people have asked if I would share some of the challenges that we’ve faced with adopting our first Newfoundland so that others looking to adopt may know what to expect.

Since I’m pretty new to all of this please don’t take this as any kind of “expert” advice and if anyone more experienced has any tips to offer please feel free to do so!

Also, keep in mind that every rescue different is going to be different. Some may come with no issues while others may have to overcome many obstacles.

Odin has been with us for just over 2 months now and we definitely are not finished with getting to know each other but his transition has definitely gone better than I ever could have imagined. 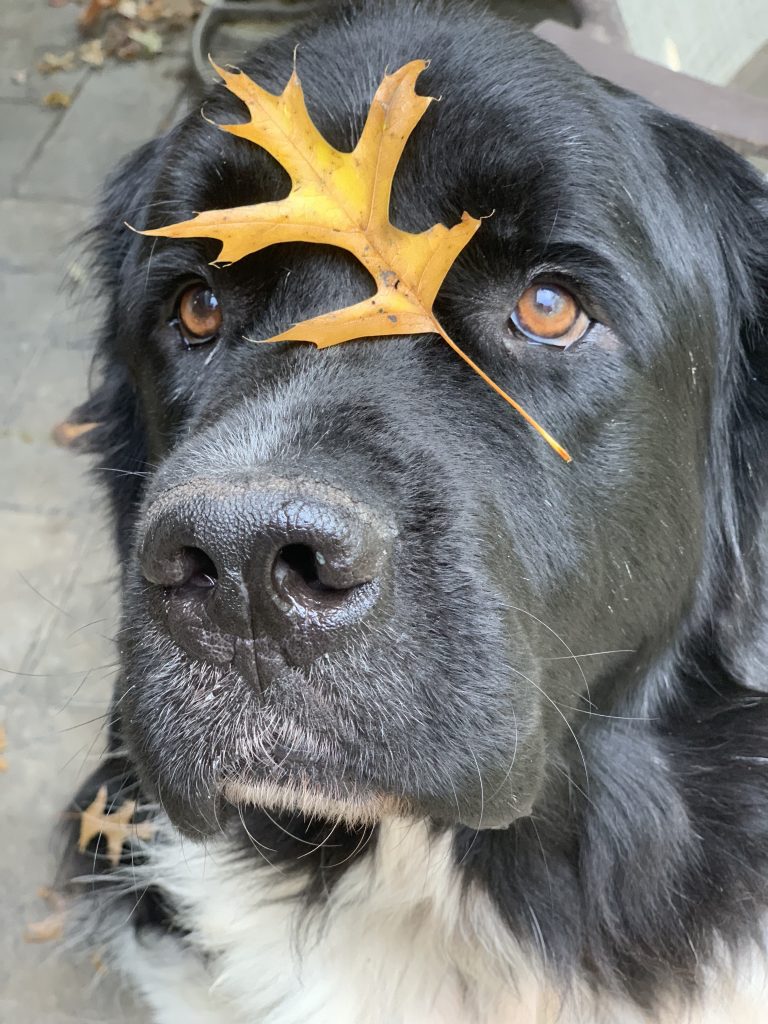 We’re just about over the so-called “honeymoon” phase and his true personality is starting to show and it’s still very new and exciting.

I’ve been giving a lot of thought to challenges that we’ve encountered and I honestly have to say that the biggest challenge that I’ve had to overcome is myself.

Before I go into that though let me go over again why I chose Odin to adopt.

Adopting another dog wasn’t something that I did on a whim. I had been giving a lot of thought about adoption months before this had taken place.

I didn’t know what I was looking for so I was pretty open. 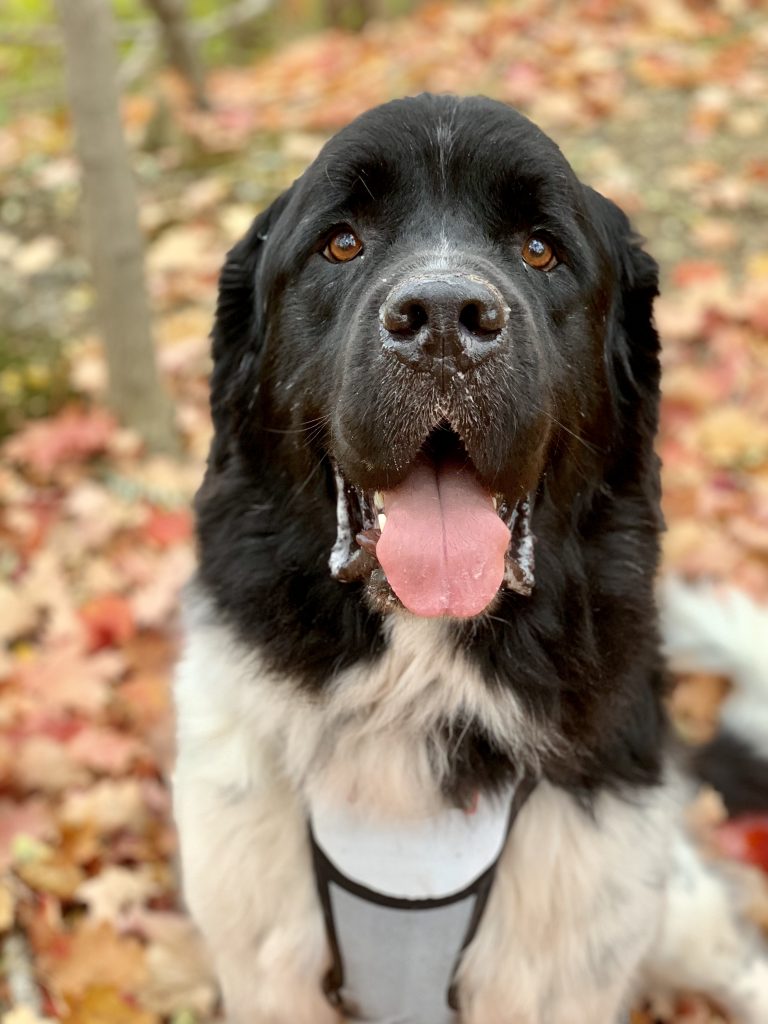 After several months of being on the lookout and following the journey of many other rescue Newfies, I started to be able to narrow down what I thought might be a good fit for us and a Newf.

I knew my limits at that time and while I knew that I had a lot of love and experience to offer a Newfie, I was mentally, emotionally and physically exhausted after Sherman’s passing and Leroy’s sickness.

A Newf that had a lot of issues to overcome was not in the best interest of me or that dog.

And then along came Odin. 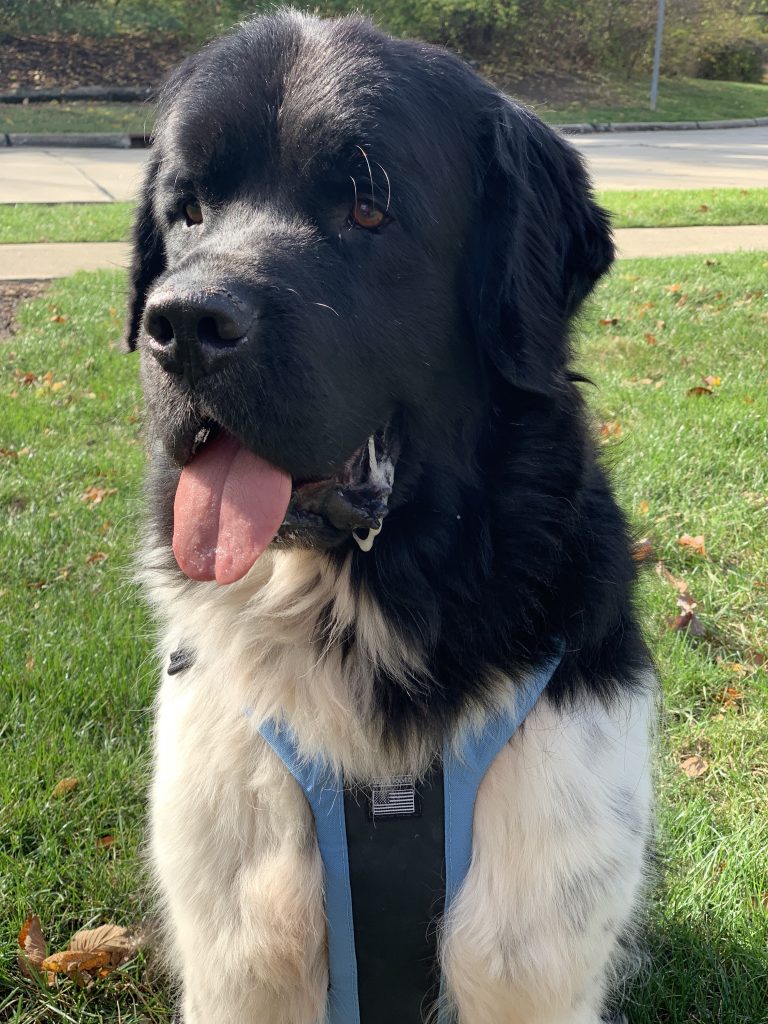 Besides being totally drawn to his picture online what also drew me to Odin was his description.

I listened closely to how the rescue described Odin and he seemed like a perfect fit for our life at the moment.

I’ve always had a Newfie since a puppy and to be honest it was a little weird having an adult 2 1/2-year-old dog all of a sudden in the house but it was also very exciting.

At 2 1/2 a Newfie’s growth plates are closed and they are ready to do all the Newfie things and I had all the plans for Odin before he even stepped foot in the house.

However, after just a few short weeks of getting to know Odin, I caught myself and I stepped back a bit. 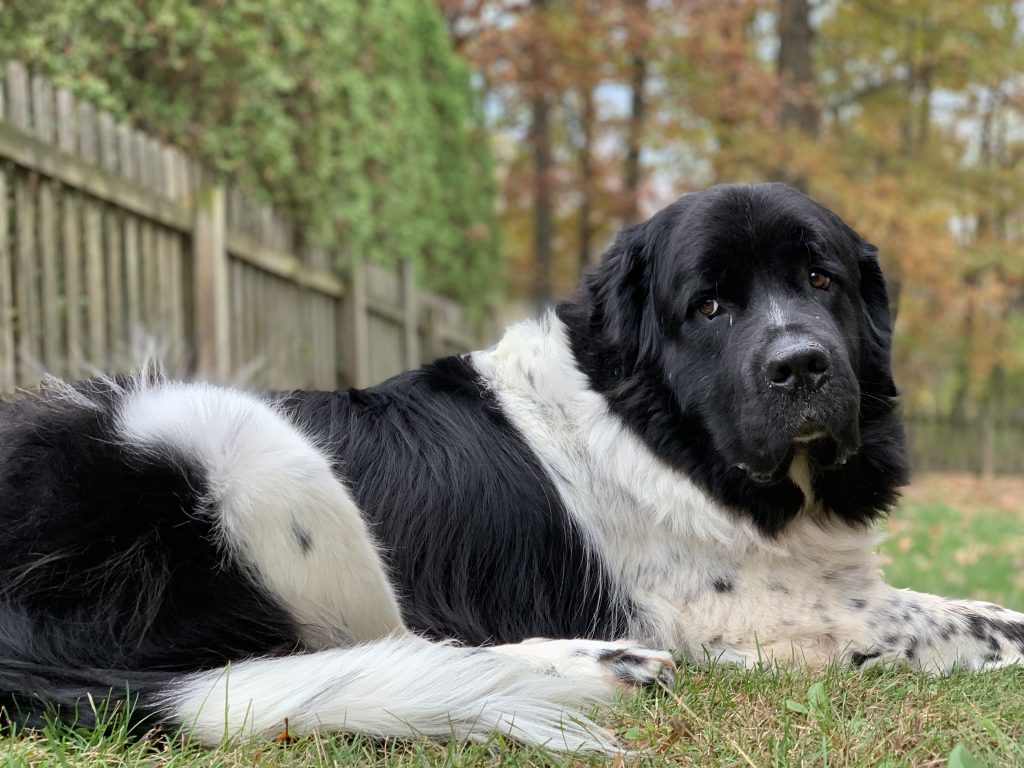 I needed to take my time and let Odin show me who he was. I needed to really zone in on him and observe everything that he did and build from there.

It was clear that the most important thing for Odin was to establish a routine and get him comfortable in his new home and not throw too much at him.

All the Newfie stuff will still be there later.

At a little over 2 years old, he is still very impressionable.

According to many articles that I read about adopting a dog, I did most things wrong.

I had planned to crate train Odin but the first night he was here he barked all night so I let him out and he slept on the couch with my son. 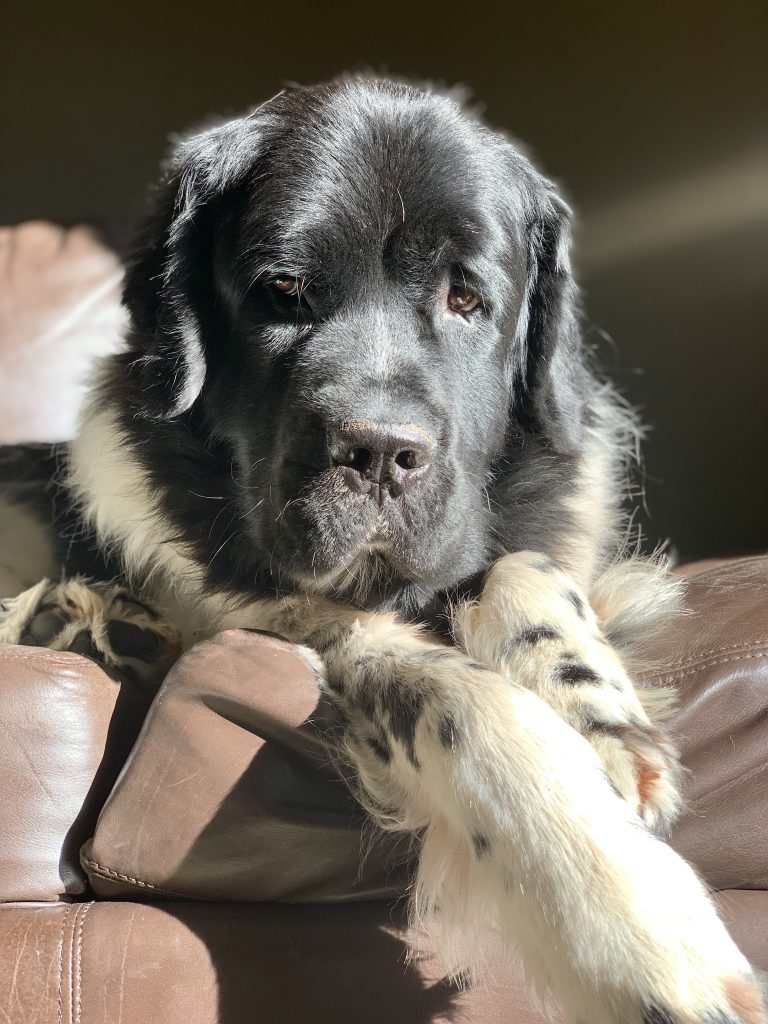 He hasn’t been back in the crate since and that might come back to bite me in the butt later on but for now, he does well without one.

I’m all for crate training and both Sherman and Leroy were crate trained and Odin was used to one at the rescue. I just buckled on that.

Which brings me the next mistake was that we gave Odin total run of the house.

At this time it doesn’t seem like a mistake because he does fine when left alone for short periods of time.

Actually, he sits at the front window and watches us leave and when we return he greets us at the door.

I took for granted that my family would just know what to do with Odin.

We have house rules and they apply to all but family members were giving a little too much leeway with Odin.

Begging is one example.

The dogs can beg but they need to beg in respectable ways.

I set that rule up right away with Odin but other members of the family were allowing him to basically sit on top of them when begging because they didn’t want to tell him no. 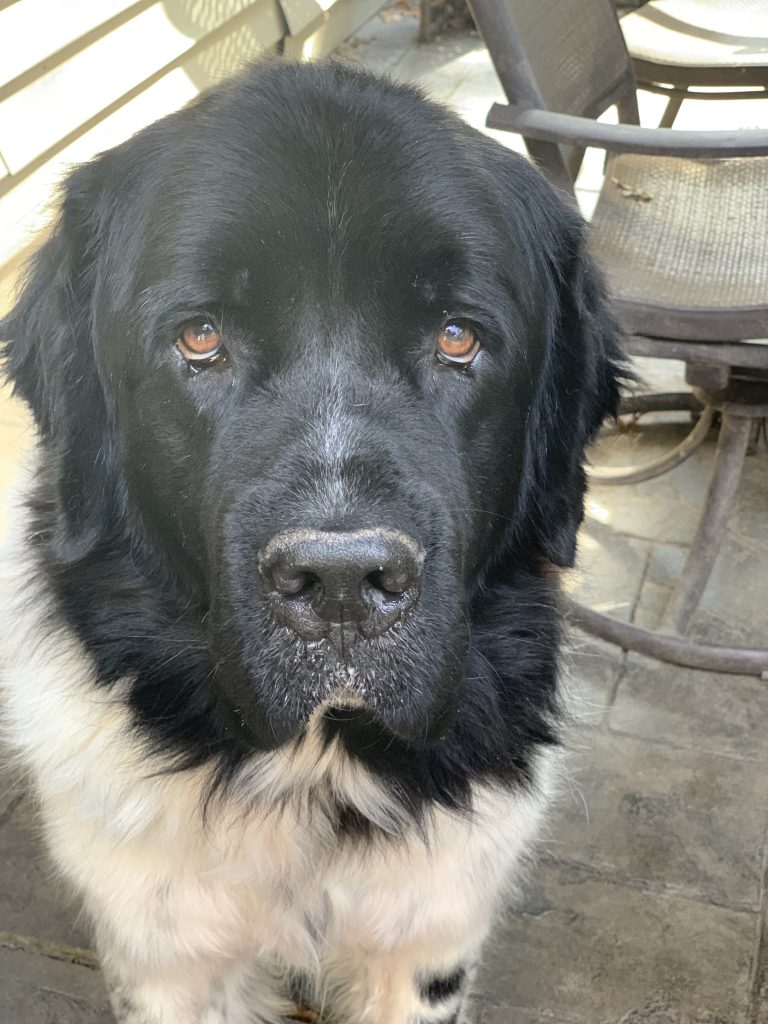 We never let Sherman and Leroy do that so I’m not sure why they thought that was appropriate.

This was creating an issue anytime anyone ate so it was nipped in the bud.

Another issue was jumping.

I knew Odin was a jumper before he came here and when he arrived I worked on taking care of it right away.

He was doing great but after a few weeks, he started jumping on people again.

Then I noticed that whenever my son came home from school he let Odin jump on him.

Back to the drawing board we went.

Leroy was a jumper and it’s one of my biggest pet peeves.

So after these mishaps, we had a family meeting and went over the house rules.

I get it in a way because having a young Newf in the house is basically new to everyone here.

Sherman and Leroy had been senior dogs for almost as long as they were young dogs and my kids forgot what a young Newfie is like.

So I definitely dropped the ball there but it wasn’t major and we were able to recover nicely. Lol. 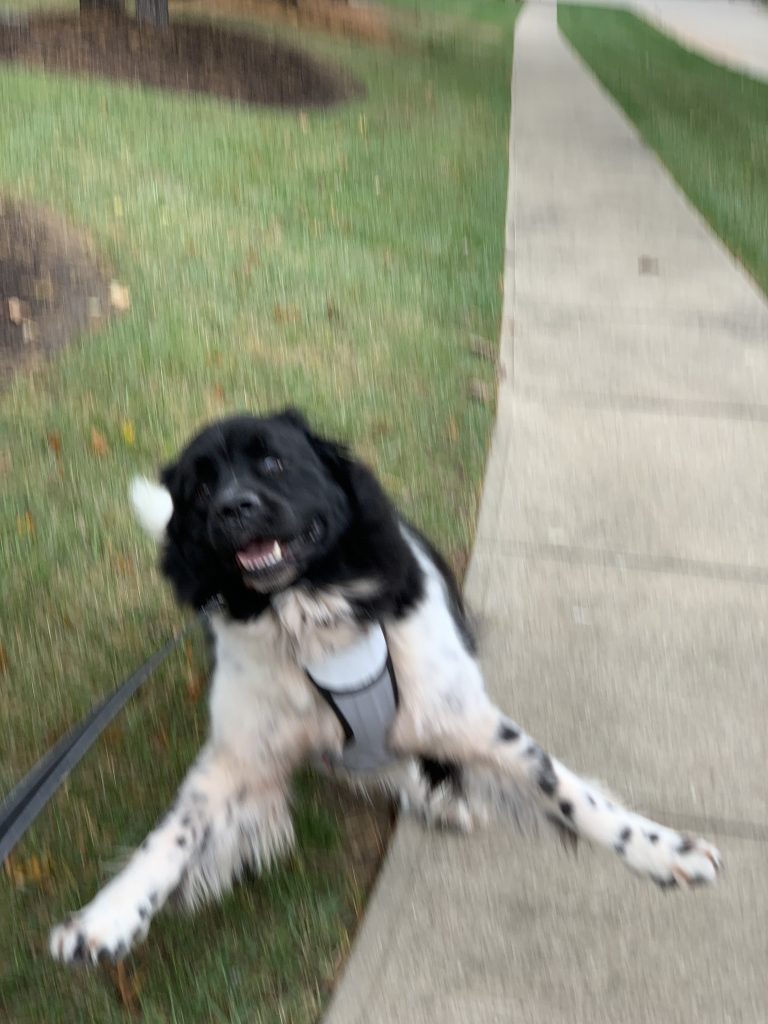 These are the challenges that I’ve faced so far.

There aren’t many and none of them are major.

Odin is a good dog that seems to have just wanted a family.

He doesn’t want to be outside alone or roaming the countryside, he wants to be inside with his family.

He wants to please.

Now that our honeymoon phase is coming to an end and Odin’s real personality is starting to show, we’ll venture out a bit more.

I would like to get him involved in some obedience classes and next year we’ll tackle some Newfie related activities.

I’m super excited to see him enjoy this winter and I’m a little worried about the Christmas tree.

He’s a little bit stubborn in certain situations and he likes to bark when he’s excited.

He also woke us up in the middle of the night the other evening barking at something.

I have no idea what it was but I knew Odin had it handled and it warmed my heart that he was protecting his family.

The only solid advice I would have for anyone looking to adopt a Newfie is to really think about your life and make sure that you have the time to commit to adopting a Newf.

Don’t rush things. Really take the time to sit back and observe everything about that dog and build from there.

Adopting a Newfoundland isn’t going to be for everyone and that’s o.k.

Know your limits. I knew that I was not able to take on a Newfie with a lot of issues at this time.

I invite anyone who has experience adopting rescue Newfies to please chime in!

p.s. Odin is not perfect and I am far from it. We both have our small issues as I mentioned in this post that we are working through. It’s a journey and it will be a beautiful and rewarding one.

When You’re Walking The Dog And The S.W.A.T Team Asks To Speak With You

Squeak This Not That While I’m Trying To Take A Nap. Hear Doggy