Styptic pencils, Kwik Stop and home remedies such as cornstarch, flour and soda can help stop your dog’s nail from bleeding.

If you’re trimming your dog’s nails from home and you find that you’ve cut the nail too far and it’s bleeding, don’t worry, most times you can get the bleeding under control with a few things found around your home.

Which I know can be hard but if you panic your dog will panic and we want to keep your dogs as calm as possible so that you can get the bleeding under control.

Most likely, your dog cried and pulled back their paw quickly when the quick was cut and now the bleeding has begun.

Reassure them that everything is ok with a few pets on the head, a chin rub, or grab a few treats.

If you have someone that can stay with the dog while you grab the supplies that you need, that’s great, go get them. 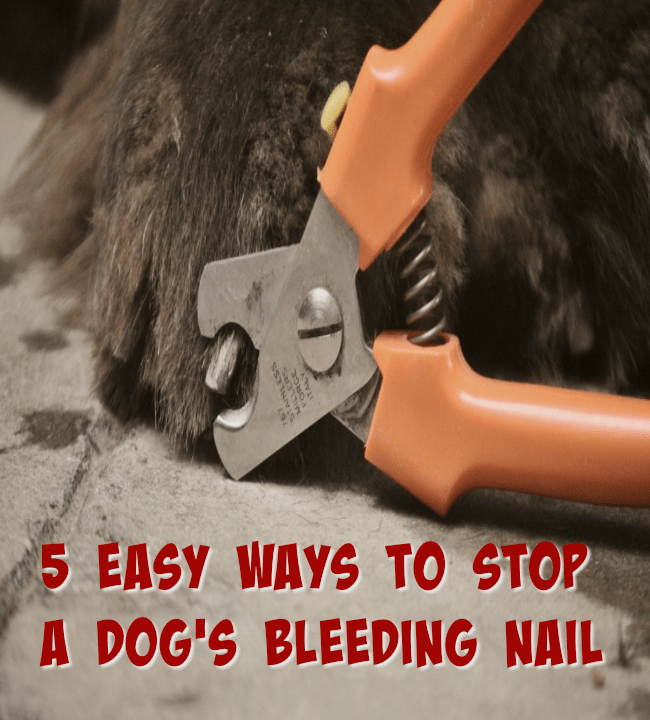 My Brown Newfies is a participant in the Amazon Services LLC Associates Program, an affiliate advertising program designed to provide a means for sites to earn advertising fees by advertising and linking to Amazon.com

Styptic Powder to Stop a Dog’s Nail From Bleeding

The quickest way to stop a dog’s bleeding is to use styptic powder.

The most common styptic powder used is Kwik Stop.

Kwik Stop can be purchased at most pet stores and it comes in a little canister.

My tip would be to pour the quick stop into the cap and then gently press the dog’s nail into it and hold it there for about a minute.

Kwik Stop also contains Benzocaine which works as a topical anesthetic to help ease the pain. Keep your dog still for several minutes after applying. 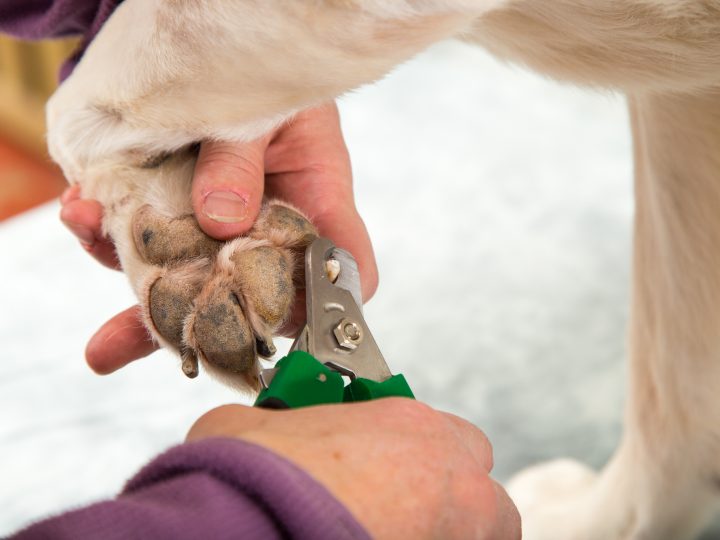 These can be purchased at most pet stores and they work similarly to powders.

You simply press the styptic pencil on the bleeding nail for several minutes.

While styptic pencils may be one of the favorites they can sting because many of them contain silver nitrate so it’s not top on my list, especially if you have a dog that is already a little nervous about having his paws touched.

They can also be very messy.

Expect your dog to feel it once you do it.

We use to use silver nitrate sticks at the vet clinic when the Kwik Stop just wasn’t cutting it.

You can use treats to help keep them in one place.

Baking soda, flour or cornstarch mixed with a small amount of water to make a paste can often be used to help a nail to stop bleeding.

Grab a pinch of the paste and use a cotton swab to gently but firmly pack it onto the nail. 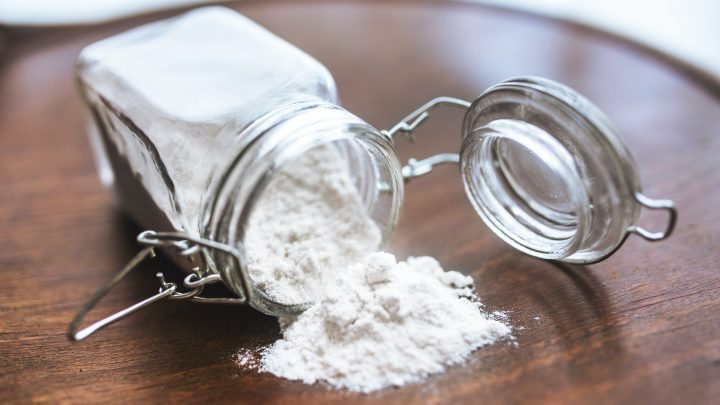 Apply pressure for a few minutes and allow it to set.

Bar of Soap to Stop A Bleeding Nail.

A slightly moistened bar of soap can work in a pinch for a minor bleed.

Simply gently press the dog’s nail into the bar of soap or gently drag the nail across the bar.

I would try to make sure it’s fragrance-free.

If all else fails a bandage wrap may be needed to keep the pressure on the nail or to keep the nail covered so that the dog doesn’t lick it or walk on it creating the bleed to start all over again.

Wraps on a nail are TRICKY.

In order for the wrap to stay on, you need to get it above the wrist or it’s just going to fall off.

My advice: try a sock first (unless your dog eats socks, then don’t do that) and tape it above the wrist to help it stay in place.

Make sure the tape isn’t too tight. You don’t want to cut off the dog’s circulation.

We use to have a whole system for Sherman. Cast padding and lots of vet wrap.

He would look like he broke his leg. Now I just use a non-slip dog sock. It’s way less dramatic and it stays on.

I’ve tried it before with some success.

It wasn’t a gusher but a slow bleed. 2 direct sprays of Afrin and then I applied a little pressure and it stopped bleeding within 60 seconds.

What To Do After the Bleeding Nail Has Stopped

Don’t worry, most dog nails will stop bleeding on their own but it could take some time.

If the bleeding is minor it can take a few minutes for the nail to stop bleeding.

If you’ve cut way below the quick it can take up to 15 minutes for the nail to stop bleeding.

Keep pressure applied to the nail.

The most important thing to do once you get the bleeding stopped is to keep the dog still for at least 20-30 minutes.

You have to keep in mind that they are walking on that nail when they move so if it’s not clotted it will keep bleeding.

Try giving your dog a nice long massage, a puzzle toy, a chew toy or anything that will occupy them for a bit.

In rare cases, some nails will not stop bleeding.

If your dog’s nail doesn’t stop bleeding after 20-30 minutes, you should contact your veterinarian.

Some nails that won’t stop bleeding will require a visit to your vet and make sure that you’re checking the nail for the next few weeks for signs of infection.

It’s technically an open wound that is constantly coming in direct contact with the dirty ground and the nail can take a few weeks to fully heal.

Any oozing from the nail or nail bed, swollen toes or limping should be seen by a veterinarian.

It’s going to bleed but remember it will eventually stop unless you have a dog with a clotting disorder. 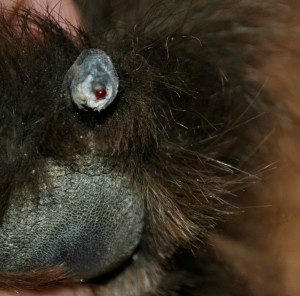 The quick is pink in a clear nail. Cut before this color DON’T cut AT it.

The quick looks like a grey dot in a black nail. As soon as you see grey STOP. STOP I said. If you go any further it will BLEED.

If you do not have clotting powder you can try a bar of soap, styptic pencils, baking soda or flour.

It’s important to make sure that you keep the dog from walking or licking at the nail so that it has time to clot. This can sometimes take several minutes. If the clotting powder falls off you can gently reapply.

When Trimming Your Dog’s Nail At Home

Keep in mind that every nail on a dog’s paw is different.

Not all nails are the same length.

Back nails may be shorter than front nails depending on your dog.

Nails on the outer part of the paw may be longer or shorter than the ones in the middle. It all depends on how your dog walks.

Have your Kwik Stop, cornstarch, soap or styptic pencil close to you when trimming.

There are several different types of nail clippers that can be purchased at local pet stores.

I’m a fan of the old-fashioned ugly orange nail clippers.

Some people like the guillotine type. I also have a Dremel that comes in handy sometimes.

I personally use a Craftsman dremel because it seems to work better with thick Newfoundland nails.  Dremels are great for dogs with brittle nails.

There’s even a nail trimmer that has a quick sensor in it. <–I have NOT heard good things about those, plus they require a battery.

Nervous about trimming your dog’s nail? Take them to your vet or groomer.

So what about you? Do have any tips on trimming dog nails? What’s your choice of dog nail trimmers?

If a dog’s nail won’t stop bleeding after 30-60 minutes you should contact your veterinarian.

This information is not meant to substitute for veterinary care. 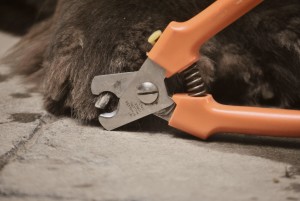 Shop our Amazon store for all your dog grooming needs!

Other posts you may find interesting:

The Secret Grey Dot Inside A Dog’s Black Nail

Disclosure-I am not a veterinarian and the information in this post does not substitute for veterinarian advice. You should always speak to your vet in regards to any questions about your dog’s health.

Fireworks: Fun For Me But Not So Much For Sherman